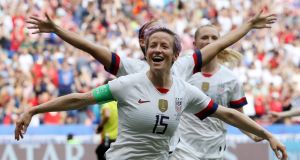 Megan Rapinoe celebrates scoring the opening goal for the USA against the Netherlands in the Fifa Women’s World Cup final in France. Photograph: Denis Balibouse/Reuters

It became clear after 13 minutes that this was going to be a different kind of game for the USA. The Netherlands, it turned out, were different from any team they had faced at this World Cup. But the US had something no other side in tournament had: Megan Rapinoe, the biggest star of the World Cup, and the confidence she embodies.

After steamrolling their way through the rest of the tournament and scoring within 12 minutes in every game, the mighty Americans had to wait an agonising 61 minutes to score against a team that very much got their tactics right. Although the Dutch goalkeeper, Sari van Veenendaal, was called on to make a handful of saves, the Netherlands were more organised and gave the Americans less space than any other team in this World Cup. The Americans’ tactics often looked stale – they tried their best to come out as the aggressors, just as they have this entire tournament, by playing direct and looking to spring attackers in behind.

But the final came down to the composure of the most unflappable player in the World Cup, the magnetic pink-haired Rapinoe. It couldn’t have been more poetic and more fitting that after weeks of discussion about Rapinoe – from the media who loved having someone interesting to write about, the other teams who feared or admired her, and even the US president who was apparently annoyed by her – that Rapinoe would be the one to step up to the penalty spot and break the deadlock.

After a video review Alex Morgan earned the penalty challenging for a ball that Dutch defender Stefanie van der Gragt put a high boot to and missed, catching Morgan. The cool-as-ice Rapinoe stepped up to the spot and hit her penalty with pace – it was comfortable and natural, much like Rapinoe has seemed throughout the grind of this World Cup.

What the Americans have counted on throughout this World Cup, more than their quality, their athleticism or their experience, has been their mentality

Once Rapinoe scored the USA’s victory wasn’t in doubt – that’s just the way they have looked when scoring first in this World Cup. The momentum had finally shifted in their favour, and it was already over. Rose Lavelle pulled off a couple of step-overs and slotted a strike past van Veenendaal in the 69th minute.

This had a very different feeling from the USA’s World Cup victory four years ago. In that final against Japan the Americans were already up 4-0 by the 16th minute, and that explosive final came after struggles early in the tournament. This iteration has been the opposite – the US has utterly bulldozed their way to the final but looked stymied by the Dutch for the better part of Sunday’s proceedings.

The USA’s struggles are a testament to a Dutch side that rightfully earned their place in the final with quality players and smart tactics. Coach Sarina Wiegman kept the Dutch in a mid-to-low block that stayed compact and limited space for the USA to attack in behind or on the wings. The USA played right into it by trying to score through brute force early on, even as van Veenendaal was called upon to make at least two strong saves.

The momentum had noticeably slipped for the Americans by the time half-time approached. That’s when the Dutch got out on a quick counterattack and centre back Abby Dahlkemper, unable to toe-poke the ball away, shoved Lineth Beerensteyn, earning a yellow card. Shortly after that Kelley O’Hara and Lieke Martens clashed heads and O’Hara had to be replaced by surprise inclusion Ali Krieger. Right about the time Becky Sauerbrunn, the USA’s rock along the back line, went down with blood streaming from her face, it looked as if the Americans might be in trouble.

But what the Americans have counted on throughout this World Cup, more than their quality, their athleticism or their experience, has been their mentality. Rapinoe, who at one point shook her fists at her team-mates as if to say, “Let’s step it up!” has embodied that mentality. The supreme confidence that some party-poopers labelled arrogance meant the US were never out of games here in France, even when the French arguably played better, the Spanish kicked the hell out of them or the Dutch choked off their service.

The momentum didn’t need to go the USA’s way for just over an hour because the US are never out of games. They always keep the faith that the momentum will come back around. They knew a player such as Rapinoe can step up with calm and execute. They knew that no one has been better throughout this World Cup.

Again, the US are the World Cup champions and, despite the Netherlands’ best efforts, it was never really in doubt. – Guardian

1 Gerry Thornley: England primed to show their best against Ireland
2 Should fans be allowed drink in the stand at sporting events?
3 Stopping Jonny May’s pace must be high in Ireland’s priorities
4 Frank Lampard says Harry Maguire should have been sent off
5 Jürgen Klopp wants Liverpool to show they are contenders
Real news has value SUBSCRIBE
Crossword Get access to over 6,000 interactive crosswords