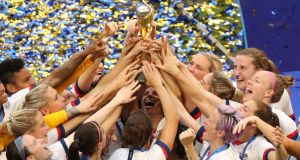 The USA celebrate their World Cup final win over the Netherlands in Lyon. Photograph: Lucy Nicholson/Reuters

Rapinoe also tied up the Golden Boot ahead of US teammate Alex Morgan, having matched her for goals and assists but in a shorter space of time. The USA co-captain slotted home the spot-kick on the hour, after Morgan had been fouled in the penalty area by Stefanie van der Gragt. Eight minutes later, Lavelle sealed victory with a fine solo effort.

With the USA having overcome the hosts, France and England en route to the final, there was less a feeling that this would be ‘Le Grande Finale’ and more of a hope that it would not be a whitewash. But the Dutch relish the role of underdogs, having won a maiden major trophy on home soil at Euro 2017. This was old money against new, the defending world champions and the European champions, who only launched a professional domestic league in 2007, going head-to-head for the first time.

When the teamsheet arrived there were a few surprises, with NWSL MVP Lindsey Horan dropped back to the bench in favour of Sam Mewis for the USA. Rapinoe replaced Christen Press, scorer of the opening goal against England, after shaking off a hamstring injury.

For the Netherlands, there was relief at the presence of forward Lieke Martens, who had been an injury doubt, and eyebrows raised at Dominique Bloodworth’s move from centre-back to left-back. They were justified concerns, and midway through the first half the former Arsenal player, who has joined Bayern Munich this summer, was pulled out of her battle with Tobin Heath and switched with Desiree van Lunteren to try and cut off American advances on the right wing.

It worked – the Dutch looked more organised than they had been all tournament, with two clean sheets on the trot against Italy and Sweden hinted that they had started to click, having conceded in their previous three World Cup games.

For the first time in the tournament, USA failed to score in the opening 12 minutes. It took until the 31st minute before the world champions had a shot on target, the first of the match. A Rapinoe corner was flicked on by the heel of Julie Ertz, was blocked and fell kindly for the latter who swung in a testing volley that Van Veenendaal saved well and Vivianne Miedema hooked away.

Wearing boots a size too small out of superstition, Van Veenendaal pulled of a string of heroic saves to keep the Netherlands level. First blocking another Ertz volley, then getting down low to stop Morgan at the near post, and minutes later turning a Morgan rocket from the edge of the area round the post.

A head clash between the underwhelming Martens and Kelley O’Hara saw the latter unable to return after the break, with Ali Kreiger coming in. The fiery encounter restarted where it left off, this time Becky Sauerbrunn left with blood pouring from her nose after going head to head with Van de Donk.

If it felt like the USA would need a stroke of luck or mistake from their opponent as they did against Spain, France and England, and Stefanie Van der Gragt handed it to them close to the hour mark. With Heath’s cross headed on by Sherida Spitse, Morgan was on hand to collect but a high Van der Gragt leg swept in, caught Morgan’s shoulder and missed the ball entirely. There was a pause for VAR before the inevitable penalty was given.

Up stepped co-captain Rapinoe to coolly power it straight down the middle, putting her ahead in the race for the Golden Boot. Her performance was an emphatic reply to the US president, Donald Trump, who had told her to “WIN first before she TALKS!” in a series of bizarre tweets aimed at the American forward. It was also a hammer blow to the Dutch, who had seemed increasingly threatening, and a stupid error from Van der Gragt.

With so much of their success this tournament having come from the wings, the USA sealed the title by cutting through the middle. Midfielder Lavelle, kept quiet for much of the game, cantered through the middle, cut in between Van der Gragt and Anouk Dekker and coolly fired low past Van Veenendaal. It was the Washington Spirit midfielder’s third goal in six World Cup games.

With a chance to cut the deficit, Miedema danced into the box from the left, turned left past one defender and right past another, but looked hesitant and failed to pull the trigger before the team in white could bundle the ball off her feet.

This was not the game many predicted, and the Dutch kept pushing for a way through the now familiar five-woman back line that the USA had converted to.

In the end though, the tactical nous, confidence, and fabled “winning mentality” saw the holders retain their title in front of a capacity crowd of 59,000 fans. Having shimmied past Spain, France, England and the European champions, USA showed their dominance of women’s football is far from waning, but the gap is getting closer. - Guardian

Rashford gives Man United another win in Paris; Gordon D’Arcy on Finn Russell 07:34
Seán Moran: Let’s leave the confusion aside and enjoy this All-Ireland 06:30
Gordon D’Arcy: Ireland don’t need to do a Finn Russell on it 06:00
Beibhinn Parsons ready to move on the next level 06:00
CJ Stander ready for Italy after lockdown sheep battles 06:00

1 Golf in Level 5 Covid restrictions: Clubs still waiting to hear if they can remain open
2 Gordon D’Arcy: Ireland don’t need to do a Finn Russell on it
3 Hugo Keenan could start in changed Ireland team against Italy
4 Aki, Ringrose and Henshaw: Brian O’Driscoll has his say on Ireland’s midfield riddle
5 CJ Stander ready for Italy after lockdown sheep battles
Real news has value SUBSCRIBE
Crossword Get access to over 6,000 interactive crosswords