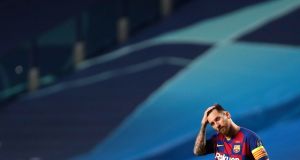 Lionel Messi has reportedly told Barcelona he wants to leave the club on a free transfer. Photograph: Manu Fernandez/Getty/AFP

Lionel Messi has told Barcelona that he wants to leave the club immediately – and on a free transfer. The Argentinian, who according to RAC1 radio had told new manager Ronald Koeman that he felt “more out than in”, has sent a fax to Barcelona informing them of his desire to go.

Messi’s camp believes that a clause in his contract means that he can walk away for no fee. Barcelona, by contrast, insist that he is still bound by a €700m buy-out clause. The bombshell dropped on Tuesday evening with the news that Messi had told the club on Tuesday afternoon.

Barcelona are yet to react officially but they continue to insist that he is part of Koeman’s plans and that if he is to depart, his official price is €700m. Messi’s contract expires next summer, suggesting that they would be forced to negotiate with potential buyers. Worse, a clause in his contract allows him to walk away for free so long as he communicates that decision.

Barcelona believe that the deadline for that clause to be applied has expired, as he had to inform them of his decision before the end of May. But given the exceptional nature of this season, which extended into the summer and did not formally end until last Sunday’s Champions League final, Messi’s camp are set to argue that the deadline should be set on August 31st.

The former Barça captain, Carles Puyol, has tweeted his support for Messi, saying “respect and admiration, Leo. All my support, friend.” Luis Suárez, who has already been told he can leave the club by Koeman, responded with two applause emojis.

The Argentinian newspaper Diario Olé has reported that Messi was left angry and frustrated after his first meeting with Koeman. According to Spain’s Diario AS, the new Barcelona coach told Messi: “your privileges here are over”.

The club’s president, Josep Maria Bartomeu, is set to hold an emergency board meeting in response to Messi’s formal request to leave. Barcelona fans are reportedly gathering outside the club’s offices, where the meeting is believed to be taking place.

Whatever happens now, the relationship between the player and the club he has called home for almost 20 years is now broken beyond repair, and the crisis deepening by the minute. Bartomeu, already under intense pressure, may now go down as the man who oversaw the last, bitter, sad departure of the most important player in the club’s history. - Guardian