Ireland huff and puff but fail to bring house down 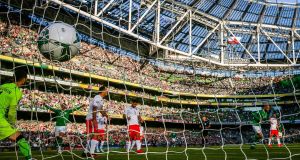 Having had a gale force wind to blame for the narrowness of their victory at the Victoria Stadium a couple of months back, Ireland just made heavy weather of this one. Joe Chipolina’s first half own goal and a really fine header from Robbie Brady in added time at the end were enough to deliver the win but it will be remembered as having been a long night by most of those who witnessed it and quickly forgotten by the rest.

It is enough, of course, to send Ireland into the summer with a five point lead at the top of qualifying Group D and that is comfortably as much as anybody could have realistically have hoped for at this stage of the campaign, even with their three easiest games having been played already.

Not for the first time, you were left with the firm impression that they will have to be better, much better, when a side like Switzerland come to town in early September. But they did what they absolutely needed to here to secure all three points against a poor side and, as he made abundantly clear beforehand, that was always going to do for McCarthy.

His players laboured through portions of the night like men who did not want to make liars of themselves for having spouted variations on the old “there are no easy games in international football anymore,” line during the build up. They might be right where Ireland are concerned. Goals are clearly an issue. Brady’s late one, from a cracking cross by James McClean, at least put a little bit of gloss on things and it was the first time in two years that an Irish side had scored more than one in a competitive game.

Ireland got 11 over the course of their two games with Gibraltar in the Euro 2016 campaign, though, and so for all their tactical improvement since then this game simply must have looked an opportunity to McCarthy.

He came into it with a squad that included four strikers who had amassed 25 international caps between but not a single goal. In an effort to spread the opportunities around, he tweaked his system and handed three of them starts. The way Ireland began, with chances in the opening minutes for Shane Duffy and David McGoldrick, it was briefly possible to imagine them all getting a hatful but the early momentum didn’t last.

After all their toil, Ireland led by a single goal at the break and while McGoldrick will doubtless be claiming that, and McCarthy giving it to him, he may find himself having to go all the way to CAS if he really wants the official credit because Chipolina was clearly the one to make the decisive contact.

From a defensive point of view it was comical stuff all around, to be honest, with Callum Robinson’s low angled pass towards the box taking two deflections on the way to Coleman - who would have been offside had Alain Pons not been the one who had helped the ball onto him.

The captain’s cross was good, to be fair, and McGoldrick should really have done better than a shot that looked to be flying well off target. Luckily for him, and Ireland, it didn’t matter in the end.

With just about half an hour played the breakthrough took the pressure off the home side but not those strikers who still had a point to prove. Ireland’s play was far from flawless but they still dominated and created a fairly steady stream of chances.

A Robinson shot curled a foot wide of the far post not long after the goal and McGoldrick sent a shot clattering off another well into the second half after he had done well cut inside from the left. The hosts looked every bit as likely to double their lead through another defensive mishap . . . for there were many.

The Gibraltar goalkeeper, Kyle Goldwin, was at the heart of a fair few, and Scott Hogan seemed to be in prime position to capitalise from the British cabinet levels of mayhem he sowed at times. But the 34 year-old then did well to deny the Irish striker three times; twice in the first half by coming off his line at key moments and once in the second when he somehow got an outstretched arm to a close range shot from a tight angle. All the while, he entertained the crowd with his near perfect run of goal-kicks put directly out of play.

Some of Ireland’s approach work was really rather smart, as with McGoldrick’s angled ball into space for that final Hogan shot - his last touch before being replaced by Maguire - and a couple of the Gibraltar defenders were having to roll out their Richard Dunne in Moscow impersonations, but there was still little excuse for the failure to add a few more goals.

Too many final balls were poor, too many passes failed to beat the last man and too many of the team’s 27 actual attempts on goal were simply not good enough with only six on target.

It will not matter now for the points are in the bag and Ireland’s fate will be decided in the autumn. But Ireland, for all the freshness of their new emphasis on playing passing football, do need to be more effective, not least up front where it is now nought from 29 and counting.