Fullback Seamus Coleman the most creative player on view, which is a concern 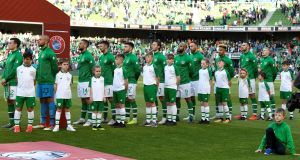 Not a trace of muck on his bright blue kit. Clean sheet number 15. Rating: 5

Easily the best, and unfortunately most creative, player on view. His shining example of attacking fullback play deserves a better era than this one. Rating: 7

Comparisons to Richard Dunne, never mind Paul McGrath, are premature. Highlight was passing the ball out of play on 18 minutes. Couldn’t get the noggin to Hourihane’s poor corners. Rating: 5

Never troubled by Tjay De Barr but that’s because the 19-year-old is only leaving home this summer for the bright lights of Real Oviedo. Rating: 5

Promising addition despite his instinct to control possession and play the safe ball on a night that screamed out for adventure. Rating: 5

Positioned ahead and to the right of Hourihane, from where he set up Hogan and Coleman for early half chances. Always probing with some lovely touches. Rating: 5

Offered a rare chance of controlling an international football match, he was unable to do so despite the subpar opposition. Still, gorgeous injury time ball to McClean allowed the winger to find Brady’s head. Rating: 5

Hardly a night for the Derry warrior, so clearly unsuited to this timid affair - no studs, no fire - yet his urgency and quality was required to secure the second goal. Rating: 7

Busy and productive down the right with the valuable ability to cut inside and whip left foot crosses. Impact lessened by inaccuracy. Rating: 6

Cannot claim the first goal as his snap shot went in off Joseph Chipolina. It was going wide. Unluckily hit post on 71 minutes. Decent. Rating: 6

Smart runs, his few glimpses at goal came to nothing. Worth another look if he can score goals in the Premier League. First needs to settle on a club, Villa or Sheffield United. Rating: 5

Robbie Brady arrived with 18 minutes remaining and avoided being dragged into the vortex of mediocrity by his late, late header. Class is permanent. Rating: 7

You can only take a horse to water. Three points and two goals means he will smile but the signs are worrying. Rating: 6

1 Kevin McStay: Maybe a knockout All-Ireland Championship is the long-term solution?
2 Gerry Thornley: Ireland don’t want to box themselves into a corner
3 Fernandes on the double as Manchester United get their revenge
4 Former France and Stade Francais winger Dominici has died aged 48
5 Owen Doyle: Ireland suffered from officiating of the breakdown
Real news has value SUBSCRIBE
Crossword Get access to over 6,000 interactive crosswords