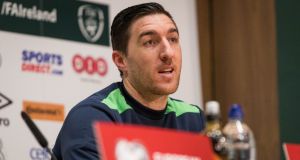 Stephen Ward: “I’m sure they will try and get him [Bale] on the ball as much as possible but it’s up to us to try to keep his effect on the game to a minimum. Photograph: Ryan Byrne/Inpho

Few things must inspire confidence in a player than being rolled out for press duty and being asked in a tone that clearly suggests impending disaster just how you are going to deal with a star opponent.

Stephen Ward came equipped yesterday with the full set of “there’s 11 of us,” and “they are about more than just one man”-style lines but he acknowledged good naturedly enough there just might still be an issue with the man from Real Madrid.

The pair came up against each other a couple of times in the Premier League although their respective positions meant the encounters fell some way short of being a duel. And Wolves, the Irishman is quick to point out, occasionally came out on top.

If the Dubliner largely avoided direct contact with the former Southampton and Spurs star up until this, though, Gareth Bale’s freedom to roam from a central advanced position means the pair are likely to come face to face over the course of the 90 minutes tomorrow.

“I am sure they will try and get him on the ball as much as possible but it’s up to us to try to keep his effect on the game to a minimum,” says the 31-year-old who is enjoying a good run of form at Burnley and relishing life back in the Premier League.

He suggests at one point that anyone he encounters in a game against a top four club would be up there with Bale but subsequently thinks better of it, admitting that the 27-year-old Bale might be a cut above even any of them.

“He is probably a step up from everything,” he says. “He is at one of the biggest clubs in the world and is playing well.

“As a team, we are going to try to try and nullify him, though. It’s not going to be easy. It looks as though he has a free role for Wales and they’ll want to get him on the ball as much as possible. So we’ll have to try to stop the service in to him and when he does get it, get as close as we can, because you cannot afford to give a player of that ability too much space or time; you know he will hurt you.

“We’ve learned from our experience in the Euros playing the top players. Lads do it every week in the Premier League too. It’s going to be one where we will have to try to stop them. It’s a good challenge but one we’re looking forward to.”

The game will be the defender’s 41st cap and his fourth of the current campaign, a very satisfactory return for a player whose career was derailed for a spell a few seasons back by problems at club level and persistent injury.

In 2013, he started just two games for his country, both friendlies, and for a portion of the last qualification campaign he had to look on as Robbie Brady started to settle in at left back.

But Ward started nine of 13 games in 2016 including three of the four in France where his performances, combined with Brady’s further up the field, seemed to settle the question of their respective positions in the side.

“No, not really,” he says when asked if he felt his regular slot in the international set-up might have been permanently slipping away from him at any point.

“You always believe in your ability. It was just about getting back playing. If I was recalled then, great. That was the reason I made the move to Brighton, to go on loan to a club that had had aspirations of getting into the Premier League. I had a good season there and I feel that coincided with me getting back in the squad. I’m enjoying my football now and hopefully that can continue.”

More than once, the conversation returns to the subject of Wales’ star man and Ward wheels out variations on the stock answers, apologising as he does it for sliding into cliché.

Bale, of course, had an outstanding European Championships but when Ward says they Chris Coleman has more than just one weapon at his disposal, he might just have a point.

When Uefa’s team of that tournament was announced, the Welsh had two men included but Bales was not one of them. He got three goals, as many as his Real Madrid team-mate Ronaldo, but Joe Allen and Aaron Ramsey were selected from the semi-finalists.

Nobody, though, asks too many questions about them.

1 Stirling and Balbirnie tee off to tee up another famous Ireland win over England
2 RG Snyman primed for hectic run with Munster and South Africa
3 Seán Moran: Boylan documentary offers a compelling insight into former Meath boss
4 Restrictions threaten 147 unbroken years of Irish athletics history
5 ‘A win like that is special and one we’ll remember forever’ - Ireland skipper Balbirnie
Real news has value SUBSCRIBE
Crossword Get access to over 6,000 interactive crosswords