Stephen Kenny sees ‘some room for improvement’ after opening act 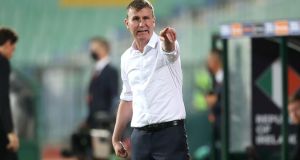 Stephen Kenny acknowledged that there is room to improve on Ireland’s performance in Sofia but the new manager felt that Ireland dominated more than enough of the game to deserve their late equaliser and seemed pleased with the way his young strikers had performed on what was a very big night for them.

“Bulgaria had that spell for about five minutes in the second half when they got on top and they scored in that period. So that crucial first goal, we didn’t get and that was difficult. We were disappointed to concede but we kept believing and we dominated after that more or less. They sat deep and were difficult to break down, they defended very well but I was pleased that the players showed such determination and composure.

“That was epitomised by Robbie Brady’s closing down the defender, it was great effort to win the corner and he put a bit of flight on the corner for Shane to score a really brilliant header. It was very important.

“We are really disappointed that we didn’t win tonight but we didn’t lose. We showed a lot of quality but we made mistakes. So some good play but some room for improvement also.”

The 48-year-old Dubliner, who described being in charge of the senior team first the first time in an almost empty stadium as a “surreal” experience, hailed the team’s collective effort as “first class” and felt that of his front three, Aaron Connolly had had the greatest impact on the evening.

“Aaron Connolly, Callum O’Dowda and Adam Idah, they don’t have many caps between them, Aaron had only one start in a competitive game before and he hasn’t played on the left for his club for a long time, or ever . . . he played in the under-21 international team on the left so he had to adapt to that. But he’s a real goal threat. That’s a big part of it. He gives you something different in that front three because he scores goals. He’s a handful and he had a decent game.

“Individually, though, I thought they all did well. There was some really good play from Callum O’Dowda and from Connolly, who was a threat, and you want players in wide areas to be contributing in that regard. I think Adam had a tough job for a young centre forward coming in but I thought that he acquitted himself very, very well. Of course they can all improve . . . we can all improve but that was a good start from the three of them really.”

Duffy, who captained the team as Séamus Coleman watched from the bench, and scored the late goal, accepted that he had been at fault for the Bulgarian goal with sharpness an issue, he suggested, given the lack of game time he has had while waiting to move clubs in recent weeks.

“Overall, we’re disappointed with the result,” he said, “we want to win those games but it’s quite new, we’re only a couple of days at it. But we didn’t lose and that’s important for the lads and the manager.”