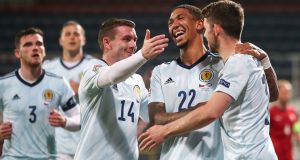 Ryan Christie (right) is congratulated by his Scotland team-mates after scoring from the penalty spot during the Uefa Nations Cup game against the Czech republic in Olomouc. Photograph: Martin Divisek/EPA

Unconvincing Scotland survived a nervy night to beat a makeshift Czech Republic side 2-1 in their Nations League encounter in Olomouc.

The hosts had quickly cobbled together a squad after the original group and staff had been stood down amid coronavirus concerns over the weekend.

The Czech Republic started with nine debutants and one of them, Jakub Pesek, stunned Scotland with an 11th-minute opener.

Winning his second cap, Lyndon Dykes levelled with his first Scotland goal in the 27th minute and Ryan Christie scored his second penalty in two games seven minutes after the break.

However, Steve Clarke’s side continued to live dangerously in the Andruv Stadium and there were several moments of panic before the final whistle.

The victory extended Scotland’s unbeaten run to five games but it was a worrying performance ahead of the Euro 2020 playoff semi-final against Israel next month.

This match had been shrouded in controversy since Friday when the Czech Republic had declared the fixture to be off after two players had to self-isolate following contact with a backroom staff member who had tested positive for coronavirus.

Uefa, however, insisted it go ahead with a new set of players and management.

Roman Hubnik, 36, came out of international retirement and only he and striker Stanislav Tecl had previously been capped in a squad chosen by stand-in boss David Holoubek, who took over from Jaroslav Silhavy.

As expected, Clarke made changes from Friday’s 1-1 home draw against Israel.

After all the pre-match fuss, nothing much happened until the home side took the lead after McLean gave away possession with a slack pass.

The ball landed at Tecl and he slipped in Pesek who, with time and space, coolly dinked the ball past goalkeeper David Marshall.

It was exactly the start Clarke did not want and shortly afterwards, Marshall tipped away a long-range drive from Pesek.

Scotland slowly worked their way back into the game and in the 24th minute a drive from Christie from almost on the by-line was saved by Ales Mandous.

Three minutes later Palmer took a cross-field pass from skipper Andy Robertson and his delivery from the right was knocked in by Dykes from close range.

However, it was the Czechs who finished the half the more threatening and in the 40th minute, after a careless pass from Christie failed to find Fleck, Marshall saved a decent effort from Adam Janos, with a Tomas Malinsky effort flying over the crossbar shortly afterwards.

Scotland took the opportunity to forge ahead in the 52nd minute when midfielder Malinsky fouled Robertson and Christie steered the spot-kick past the diving Mandous.

But the Scots still struggled to shake off their game opponents.

On the hour mark, Czech midfielder Marek Havlik came close with a curling free-kick from just outside the box which clipped a post.

The visitors looked ragged. Marshall made a terrific save from the unmarked Pesek and Tecl, with the goal gaping, stumbled and the ball went behind.

It was a real let-off for the visitors, who had replaced the injured Dykes with Callum Paterson while McGinn came on for Fleck.

In the 72nd minute, as Scotland defended their penalty area, home defender Vaclav Jemelka fired a drive inches over.

Paterson missed a chance on the break but in the final minute of normal time Czech substitute Antonin Rusek hit a post with a header as Scotland escaped once again.