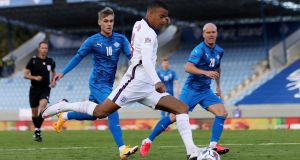 England youngsters Mason Greenwood and Phil Foden have been sent home from Iceland after inviting girls to their rooms after Saturday’s Nations League win against Iceland. Photograph: Getty Images

Gareth Southgate has confirmed that Phil Foden and Mason Greenwood have been sent home separately after they allegedly invited two women to the England team hotel in Reykjavik and breaking coronavirus isolation rules as a result.

The players had made their senior international debuts in the 1-0 win over Iceland on Saturday – Foden as a starter, Greenwood as a substitute – but they did not train on Monday morning.

At a press conference for England’s match against Denmark on Tuesday, Southgate said: “Unfortunately this morning it was brought to my attention that two boys have broken Covid guidelines in terms of our secure bubble. We had to decide very quickly that they couldn’t have any interaction with the team. They wouldn’t be able to travel to training. Given the protocols they have to follow they have to travel back to England separately.”

Asked if the duo had invited women to their rooms, Southgate added: “Nothing has happened in the areas we occupy in the hotel. We are starting to get to the depths of all the information. This was only brought to my attention before training. It was a clear breach of Covid guidelines. We have no alternative but to do what we are doing. They’ve been naive, I recognise their age but the whole world is dealing with this pandemic and there’s responsibility on every age group in playing their part and not spreading the virus. They have apologised.”

A statement from Manchester United said they are “liaising with the Football Association and are disappointed with the actions of Mason Greenwood over this situation”.

City added: “It is clear that Phil’s actions were totally inappropriate. His behaviour not only directly contravenes strict guidelines related to Covid-19, but also falls well below the standard expected of a Manchester City player and England international.”

The story was broken by the Icelandic publication DV, which said the women had revealed the rendezvous to their Snapchat followers late on Sunday night. DV have spoken to the women, who told them they did not want to discuss the matter as they did not want to get Foden and Greenwood into trouble. According to DV, they were “devastated” to learn the pictures had entered the public domain.

Foden and Greenwood are clearly identifiable on the grabs of the Snapchat footage and it adds up to yet another headache for Southgate, whose team travel to Copenhagen on Monday.

The England manager has had to deal with the fall-out from Harry Maguire’s arrest and trial in Greece plus a raft of technical and logistical issues that relate to player fitness amid the pandemic. The squad were given an exemption to the rule that states travellers to Iceland must quarantine for five days upon arrival in the country. Under the terms of the exemption, the players and members of staff were not allowed to meet anybody outside their biosecure bubble – apart from when they played the game against Iceland. According to an Icelandic FA employee, they “do not even get permission to meet their family”. – Guardian