Quinn open to extending his current role with the FAI 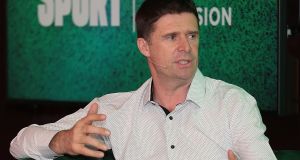 NIall Quinn: “Normally, to do a job, you would give yourself three years. Gary [Owens] has spoken about a 10-point plan. It’s going to take a lot of time.” Photograph: Pic Brian McEvoy

Unlike his predecessor John Delaney, who didn’t discriminate on his political allegiance so long as it boosted his profile, Niall Quinn has a particular interest for swaying towards the rising party.

“I believe Sinn Féin won the election due to their digital strategy,” said Quinn, deputy Football Association of Ireland chief executive but the public face of the new regime.

“While Fianna Fail and Fine Gael were waiting for people outside of Mass, these guys were winning the election online.

“Fair play, they did a brilliant job. I think we can learn lessons from that. Football can be better served interactively in the new modern digital world where our clubs can feel part of the everything that happens in the FAI.

“I know it’s a big step in some people’s mind but it’s not really. We should have a portal where all the 1,400 grassroots clubs, whether they’re in from Donegal, Cork or Wexford, can find out what’s happening,

“Uefa have agreed that we’re capable of doing it digitally rather than clubs without sending up signatures in the post to the FAI in order to register players.”

Quinn’s head, as ever, is abuzz with various initiatives for overhauling the organisation he joined only six weeks but, for all his ideas to take flight, a longer stint than the one he’s initially committed to is necessary.

Specifically, as with chief executive Gary Owens, his current involvement is due to end after the annual general meeting in Galway on July 25th. Yet given further reforms to fulfil their part of the recent bailout deal are imminent, the engineers of delivering that change are likely to remain in situ.

“If there’s a nice flow and we can see a change happening, not getting blocked for whatever reason,” he answers when asked about his desire to upgrade the role to permanent.

“And if I feel that it is appropriate and I can be here to lead something. As an interim, it is very hard to talk about two years or a year down the line. You cannot do it, there is no point. Normally, to do a job, you would give yourself three years. Gary has spoken about a 10-point plan. It’s going to take a lot of time.”

Before he can project that far into the future, the legacy from his previous era still needs cleansing.

Quinn, while respectful of his former manager Mick McCarthy, shared the public outrage at revelations of a pre-ordained exit package negotiated as part of the succession plan hatched by Delaney in November 2018.

Whether or not he guides Ireland through the play-offs later this year, McCarthy will walk away with a €1.13 million golden handshake, almost three times the salary of the incoming Stephen Kenny.

It appears Robbie Keane, too, will receive a handsome severance should, as expected, Kenny opt against retaining him on his staff during the handover.

Otherwise, Quinn will have to find a post for Ireland’s record goalscorer to see out the remaining two years of his contract.

“It’s an inheritance that we’re absolutely dealing with,” confirmed Quinn. “It’s the same as a lot of stuff from the past which is Gary’s bag and are not subjects I’m very confident talking about. However, as an overview, where contracts were signed, we’re absolutely obliged to honour them and will do.

“As for Robbie, we’ll handle that as Stephen determines, and we’ll react. If we’ve to honour the contract, regardless of where Robbie is, we’ll do that.”

In the midst of the looming personnel changes, the likelihood of one familiar face returning to the FAI increases all the time. A recent invitation meeting between Brian Kerr and new FAI chairman Roy Barrett was described by both sides as productive, paving the way for a comeback.

Quinn said: “There’s still stuff to get ready in terms of the new culture and when that settles, I’m sure Brian will be called in and spoken to. It would be fabulous to have Brian and we’re pretty much in favour of it. Still, we can’t override governance procedures just because Brian is out there.

“We’d have workers in there who might look to get promoted as well, so we just have to do that very professionally. Look, I believe in Brian and we just have to get him in there in some shape or form.”