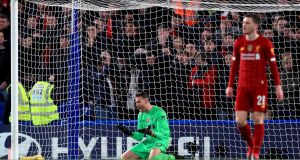 Enter: the wobble. On a chilly, slightly wild night at Stamford Bridge Chelsea progressed to the quarter-finals of the FA Cup at the expense of the team previously known as Jürgen Klopp’s Irresistible Red Machine.

Sport loves a premature note of crisis. Perhaps one or two will now be offered, although Klopp has probably earned a little breathing space before the cleaver is unsheathed. Liverpool played well in patches and might have wrenched the game their way with better finishing. But there was something else too, a sense of a pattern emerging. Even, whisper it, of some more systemic vulnerability being winkled out.

How do you kill that which cannot be killed? How do you derail a runaway train? The answer, English football seems to have concluded – belatedly, Napoli might say – is you close down the full-backs. Take the flanks. Win wide. Hope they don’t score first. Stick to the plan. Here endeth the lessons of Watford.

Chelsea came to Stamford Bridge with something similar in mind. They packed the central midfield, pressed hard on the flanks and took their chances. At the end of which Liverpool have three defeats from four and an FA Cup exit at the hands of a Chelsea team led in midfield by a fine display from Billy Gilmour. Gilmour is 18-years-old and 5ft 5in. He glided about the pitch like some wonderfully gifted Yugoslavia playmaker of the late 1980s, albeit in this case from Scotland via Cobham.

How much will this defeat hurt Liverpool? This is not a club that defines itself in FA Cup wins, as two in the last 28 years might suggest. More interesting is the sense of opponents finally locating some traction.

Klopp did pick a callow Cup team. Neco Williams started. Curtis Jones, a year older at 19, was in central midfield. Right-back was the key change, though, in a team who locate their attacking pulse on the flanks.

It isn’t hard to see who Williams bases his game on. The surge, the stroll. The ball pinged in from the right with vicious fade and slice. Williams was even caught upfield early on, Trent-style, as Pedro skittered in behind, but closed the space with a spurt of gas. If you do not see the thrillingly cavalier red-shirted right-back you require please ask – others are available. That early diagonal pass looked like a plan. Frank Lampard had packed his flanks with speed and hustle, albeit slightly venerable speed and hustle in Pedro and Willian. Between them they helped make Chelsea’s opening goal.

Williams passed back into central defence. Chelsea pressed high, dislodging the ball, which ran to Willian. His shot was straight at Adrián, who showed all the quick-footed agility of a municipal wheelie bin, allowing it to hit him and bounce away into the corner. Adrián made exculpatory gestures, suggesting his view had been blocked – Stamford Bridge seemed unsympathetic.

Liverpool had plenty of chances to equalise. There was a triple block on the goalline at one point. They dominated the start of the second half in familiar fashion. But there was a lack of razor edge too. Sadio Mané has one goal away from Anfield since November. Divock Origi has none this season, Takumi Minamino neither. It showed at times.

But it also made for a fun, carefree Cup tie. There were more than a hundred misplaced passes in the first half alone, along with 19 shots. The key stat, though, was Chelsea’s 35 long passes, many in search of that tender point behind the advancing red lines.

Most likely this is just a blip. Liverpool don’t need control to win games. They can run harder than you, fight more furiously. Is this the way it’s going to be from here? A steamrollering team cranking at the throttle, trying to jump-start themselves through the endgame?

Certainly the sense of interruption remains after that half-baked mid-season break, a break where it always felt like the phone was still on, inbox still pinging, pulse never quite at rest.

Perhaps other teams used that time better, planned better, studied more. Another key to Watford’s success was preying on Liverpool’s high defensive line. No doubt the prospect of Olivier Giroud being fired up like a petrol lawnmower, ears pinned back, goggles clamped, ready to chug in behind Virgil van Dijk will have shot a bolt of terror through the away dressing room. These days Giroud runs like a man remembering, vaguely, how it’s done.

But he did his job between the wide players and helped to make the second goal too, drawing Van Dijk upfield and allowing Chelsea to launch a full-length break. Ross Barkley ran on unchallenged then spanked the ball past the unhappy Adrián.

Chelsea will take great heart from victory. For Liverpool defeat will feel like a minor tremor. This team are too good not to adjust and find their rhythms again. But for the rest of the league, and for Atlético Madrid, due at Anfield in a week’s time, the next few games have their own fascination. Not to mention the sense, at last, of some space to work in. – Guardian