Nations League: How Ireland can still get a Euro 2020 playoff place 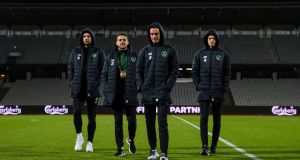 Ireland’s Shane Duffy, Robbie Brady and Shaun Williams on the pitch in Aarhus before the Nations League meeting with Denmark. Photo: Ryan Byrne/Inpho

The Nations League has actually been pretty straightforward so far but all of that is about to end. A total of 16 teams from the competition, four from each league, will get the chance to qualify for the European Championship via the playoffs (semi-finals then a final, all one game with the higher ranked sides at home in the first round) but only if they do not progress directly as a top two team from the qualifying groups to be played next year.

As many of the teams in the top two tiers will have qualified in this way, other sides who have not won their Nations League groups will get reprieves. There are, for instance, sure to be vacant slots in the League A playoffs and so teams from League B will be bumped up. As group winners in the Nations League will not be penalised for doing well, the vacancies in League A will be filled by the next best ranked sides, based on their Nations League group results, from League B, after which any vacancies in the League B playoffs will be filled.

The net effect is that with the Republic of Ireland ranked 23rd of 24 League A and B teams after the 0-0 draw with Denmark, and 20 teams to qualify directly from next year’s group stages proper, it would take six of the teams ranked ahead of Ireland failing to qualify – or six sides ranked below Martin O’Neill’s side making it – for Ireland to miss out on a playoff.

Assuming 23rd will get Ireland a playoff, they might actually benefit from the low ranking as they are more likely to end up in the League B playoffs than a League A one.

All of the above would, of course, become academic if Ireland qualify directly. What is certain is that they will be third seeds when the European Champions draw is made on December 2nd in Dublin with two teams to qualify from each of the 10 groups.