‘It was a minority albeit a loud minority,’ says Simon Harris of ‘embarrassing’ fans 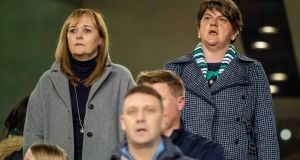 DUP leader Arlene Foster (right) stands for ‘God Save the Queen’ as Northern Ireland took on the Republic of Ireland at the Aviva Stadium, Dublin. Photograph: INPHO/Morgan Treacy

Soccer fans who booed God Save the Queen at an international friendly between the Republic of Ireland and Northern Ireland are “quite frankly idiots”, Minister for Health Simon Harris has said.

His remarks echo those of Tánaiste and Minister for Foreign Affairs Simon Coveney, who was at the fixture in Dublin’s Aviva Stadium on Thursday evening, when the UK’s national anthem was played before the kick-off.

“The Tánaiste was there at the game, the DUP leader Arlene Foster was there.

“This is meant to be a country of céad míle fáilte, a hundred thousand welcomes, sport is supposed to be a unifying event.”

Mr Harris told Newstalk radio that everybody had been hoping for “90 minutes of a reprieve” after a “very intense week in terms of political discussions about north, south, east, west relationships”.

“It was a minority albeit a loud minority,” he said of the booing fans.

“But they were quite frankly idiots and it shouldn’t have happened.”

Following the nil-all draw, Mr Coveney tweeted that he was “embarrassed that a small number of idiots” booed the “national anthem” of the Northern Ireland team.

“Competitive friendly, but Northern Ireland were our guests tonight in Dublin!” he added.

He had been pictured shaking hands with Ms Foster, who was also in the stands for the game.

Ms Foster replied on Twitter: “Thank you Simon. Otherwise, it was a lovely evening. . . NI almost clinched it too!”

The DUP leader said she was “delighted to be in Dublin” where she received a “great welcome” from FAI chief executive John Delaney and FAI president Donal Conway.