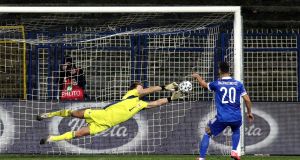 The dream of a second successive appearance at the European Championship remains alive for Northern Ireland following a nerveless penalty shoot-out victory over Bosnia and Herzegovina in Sarajevo.

Liam Boyce and Bailey Peacock-Farrell delivered the vital contributions, the substitute with the match-winning penalty and the goalkeeper with the only save of the shoot-out, to set up a playoff final against Slovakia at Windsor Park next month.

Ian Baraclough, managing Northern Ireland for only the third time and off the back of a drubbing by Norway last time out, deserves immense credit not only for the tactics that stifled the home side but also his approach to the first competitive penalty shoot-out in Northern Ireland’s history.

In the final seconds of extra time he substituted two substitutes for Conor Washington and Boyce purely for their penalty prowess. Both delivered from 12 yards, Boyce scored the final kick to send Northern Ireland into ecstasy after Peacock-Farrell’s save from Haris Hajradinovic had given them the edge. Edin Visca hit the bar for Bosnia, George Saville put his over the bar, but cool heads of Stuart Dallas, Kyle Lafferty and the two subs sealed a memorable triumph.

The home side controlled from the start, and for large swathes of the second half after Niall McGinn had brought the teams level, but Northern Ireland fought back every time. Their third game under new management – seven months after the playoff final was scheduled to have been played under Michael O’Neill – witnessed a vast improvement on the previous outing and answered Steven Davis’s call for a display befitting his record 120th appearance for his country.

Baraclough chose not to train at Stadion Grbavica on the eve of the semi-final and the wisdom of that decision was in question immediately. His players struggled to keep their feet from the first whistle onwards – Paddy McNair slipped taking the kick-off and had to retake – and problems with the surface contributed to the home side claiming an early lead. But the pitch was not the only factor, as Northern Ireland allowed Bosnia and Herzegovina to dominate until the moment Rade Krunic made the breakthrough.

The visitors made an apprehensive start, punctuated by a series of needless fouls that enabled Miralem Pjanic to sweep a series of dangerous free-kicks into their penalty area. Corners included, the new Barcelona midfielder delivered five set-pieces into the Northern Ireland box inside the first eight minutes.

Sinisa Sanicanin headed the best opportunity from them over Peacock-Farrell’s crossbar but the pressure continued, Northern Ireland found no way to alleviate it, and there was no surprise when Dusan Bajevic’s side edged ahead. The opener was galling from Baraclough’s perspective, however.

Branimir Cipetic, the Bosnia and Herzegovina right back, was released in space down the right by a simple ball out of defence and over Jamal Lewis. Jonny Evans came across to cover but lost his footing at the crucial moment, one of several Northern Ireland players to do so. That left Cipetic free to pick out Krunic arriving in the penalty area and the Milan forward converted low between the legs of Peacock-Farrell, to the delight of almost 2,000 home supporters allowed in the stadium.

It was the worst possible start for Northern Ireland but also their wake-up call. They almost levelled immediately, and with their first attack of the contest, but the goalkeeper Ibrahim Sehic saved superbly down to his left to prevent Josh Magennis heading in Corry Evans’s telling cross from the right. Saville, launching himself at the rebound, took a kick in the face from Anel Ahmedhodzic but the Spanish referee and VAR rejected the penalty appeals.

Though Pjanic went close from distance and Peacock-Farrell saved from Krunic there was more purpose and intent in Northern Ireland’s attacking play after falling behind. The hosts, missing several defenders through injury, were visibly uncomfortable under pressure and Saville should have equalised on the stroke of half-time. McNair’s back post header found the midfielder unmarked in the area but, having controlled with his chest, he volleyed wildly over from close range.

The interval did not break the momentum or increasing menace in the Northern Ireland performance. Baraclough’s side started the second half in the ascendency and were rewarded with the equaliser they craved when Magennis flicked Craig Cathcart’s long ball into the path of McGinn.

The 33-year-old, who sealed his country’s famous win over Ukraine at the last European Championship in Lyon, nicked the ball past two defenders, benefiting from a kind ricochet off each, before beating Sehic with a cool finish. Moments later he almost created a second for McNair with a delightful left wing cross but Sead Kolasinac out-muscled the Middlesbrough defender in front of the home goal.

The roles then reversed again as the team that conceded sparked into life. Peacock-Farrell saved well from Krunic and, from the resulting break, Saville saw a goalbound shot blocked by Cipetic. Pjanic, who orchestrated almost every promising move for Bosnia, curled a free-kick against the bar after being fouled by Davis. Amir Hadziahmetovic drew another save from the Burnley goalkeeper. Edin Dzeko lobbed him from Pjanic’s through ball but could not find the target. – Guardian