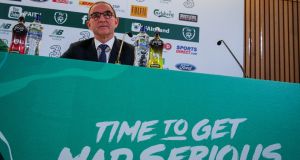 Republic of Ireland manager Martin O’Neill at the announcement of the squad to play Denmark and Wales in the Nations League. Photograph: Ryan Byrne/Inpho

If the ongoing absence of Declan Rice has been entirely beyond the control of the Irish management team then Harry Arter’s temporary exile last month was a largely self-inflicted blow.

And while Rice’s future is yet to be resolved, there was, at least, complete clarity as to whether Arter’s situation had been addressed yesterday with Martin O’Neill gently avoiding any confirmation that Roy Keane had apologised to the Cardiff City midfielder for his behaviour towards him at the start of the summer but acknowledging that there had been a call and Arter is now happy to return.

O’Neill has spoken to the 28-year-old too, he says, and told him that his priority now must be to prove those who have doubted his ability, or attitude, wrong. Bournemouth boss Eddie Howe is presumably top of that list but Keane, O’Neill confirmed, is up there too, with others.

The manager’s words came after an interview given by his assistant on Wednesday to Notts TV, a local broadcaster in the city of Nottingham, in which the Corkman suggested that there are too many “cry babies” in professional football.

Keane was being asked about the current situation at Manchester United, specifically the ongoing battle between Jose Mourinho and the France international star Paul Pogba. But, he said; “I’m not talking about Pogba. I’m talking about players in general. Players who get upset with a manager or a member of coaching staff and think: ‘I’m not going to train properly because somebody upset me’. There’s a lot of cry babies out there.”

Arter, of course, might have been a million miles from Keane’s thoughts as he said it all, but then again he might not have been.

O’Neill, in any case, suggested the midfielder is more or less bound to come into firm contention to start the games against Denmark and Wales on the basis of him having started Premier League games regularly over the past few weeks.

That’s not a logic that had necessarily been applied to Matt Doherty this time last month but the manager acknowledged the Dubliner’s strong recent form and dismissed any suggestion that his omission from the starting line-ups in Cardiff and Wroclaw had anything to do with his “face not fitting”.

At the time, the manager had suggested that Doherty did not to commit himself to attack in the way that either Séamus Coleman or Cyrus Christie did but he insisted that the player took his observations in the way they were intended, as constructive criticism.

“I think Matt might actually listen and so it’s really important for me to tell him what I think about his game,” he said. “Regardless of what everybody has said about his face not fitting, I think he’s appreciated it. And naturally I am pleased if anyone is playing in a big league; that has to be good news.”

None of which is to say that Doherty will get to play in these games. Christie, he said, had done well last time out and employing a flat back four would require the Wolves wing back to play a significantly different role to the one he has performed so well for his club of late. Still, his form has, perhaps, softened the blow of losing Coleman, whose recovery from a stress fracture has apparently suffered a set-back that will keep him sidelined for another few weeks.

Robbie Brady’s hopes of featuring in these games have been similarly hit with the midfielder, who played virtually a full under-23 game for Burnley at the start of last week, now unable to make the anticipated first-team return this week that would have paved the way to him playing a part for Ireland.

News that Stephen Ward is also encountering some problems completing his journey back from a knee injury, meanwhile, was so fresh that O’Neill didn’t actually realise initially that the FAI had taken the player out of the provisional squad he had submitted. The Burnley left back will now see a specialist on Monday after which a decision will be made on whether he can join the group for some, or all, of the international break.

Former Dundalk midfielder Richie Towell has been called up by O’Neill for the first time and Seán Maguire has been recalled after a long lay-off with a hamstring problem. The striker must, it seems, play some part for Preston this weekend if he is to have a serious hope of featuring for Ireland in either game.

At his press conference, meanwhile, Ryan Giggs confirmed that Gareth Bale should be fine for the game against Ireland but Christian Eriksen remains a serious doubt for Denmark’s visit to Dublin due to a stomach muscle problem.

“Eriksen is a world-class player and if he is out of the side then it would be a plus for us because it is hard to replace world-class players,” said O’Neill. “But by the same token they would be pretty pleased to see the number of players that we thought that we might get back and that we have lost ourselves.”

1 Tianna Bartoletta: ‘After you’ve gotten your medal, you become black in America again’
2 Betting shops face uncertain future as they prepare for Monday reopening
3 Timo Werner giving up on Liverpool dream on path to being truly wanted
4 Ian O’Riordan: An education in race and running during college days in America
5 Mature Ringrose keeping the ups and downs of rugby life in perspective
Real news has value SUBSCRIBE
Crossword Get access to over 6,000 interactive crosswords