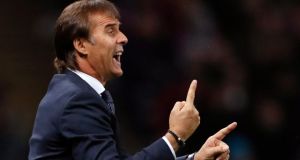 Real Madrid coach Julen Lopetegui will be desperate for a convincing victory at Alaves on Saturday to stem the rising tide of discontent after the team’s worst goal drought in 11 years.

Lopetegui has come in for heavy criticism as Real have gone three games without scoring, with Tuesday’s 1-0 Champions League defeat at CSKA Moscow following a humbling 3-0 loss to Sevilla and a 0-0 draw with Atletico Madrid.

Real remain joint top of La Liga with Barcelona despite their stuttering start to the campaign and are still expected to progress from their Champions League group, but that has not saved Lopetegui from criticism.

The coach was lambasted by newspaper Marca for “treating the Champions League like an insignificant Cup game” in leaving captain Sergio Ramos at home and using the occasion to give 21-year-old Sergio Reguilon his first game for Real.

Marca also highlighted that Lopetegui has made the worst start to a season of any Real coach since John Toshack in the 1999/2000 campaign and its front cover after the defeat to Moscow railed against Real’s failure to score in more than five hours of game time.

Real’s problems in front of goal do not appear to lie in failing to create chances, though, as they had a staggering 26 shots against CSKA and hit the woodwork twice.

Instead, they appear to be lacking a prolific forward capable of filling the void left by Cristiano Ronaldo’s departure for Juventus, with Gareth Bale and Karim Benzema’s strike rates having slowed after promising starts.

The lack of a goal threat could lead to Mariano Diaz forcing his way into the starting line-up against Alaves, who are in the unfamiliarly high position of sixth in the league standings and would go level on points with Real should they win on Saturday.

Another concern for Real has been a habit of shipping goals early in games. They fell behind in the second minute against Moscow and conceded twice inside 21 minutes at Sevilla. Of the 11 goals they have conceded in their 10 games, eight have been scored in the first half.

Lopetegui’s plight has not been helped by injuries. Defender Dani Carvajal was forced off against CSKA and has been ruled out for Saturday, along with Isco and Dani Carvajal, while Raphael Varane is a doubt after missing training on Thursday.

Elsewhere in La Liga, champions Barcelona visit Valencia searching for a first win in four league outings. Barca, however, remain top of the table on goal difference and recorded a confidence-lifting 4-2 victory against Tottenham Hotspur in the Champions League on Wednesday.

Fourth-placed Atletico Madrid host fifth-placed Real Betis, while Sevilla, third and one point behind Real and Barca, are at home to Celta Vigo and will be looking to pounce on any slip-ups from Spain’s biggest two clubs.