Martin O’Neill searches for positives after an eventful week 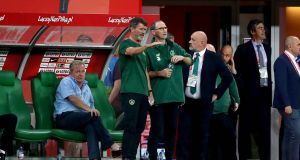 After a bad week on the road Republic of Ireland Martin O’Neill was clearly relieved on Tuesday night to get out of Wroclaw on anything that might be viewed as a positive note.

O’Neill was quick to suggest afterwards the performance of a depleted Ireland side against Poland has restored some of the confidence beaten of out of his players in Cardiff.

The situation heading into the Nations League games next month against Denmark and Wales can scarcely be described as ideal; along with Robbie Brady, James McCarthy and others, O’Neill said Séamus Coleman is now a “concern” for the double header after a scan on the injured foot that sidelined him on Tuesday revealed a stress fracture.

The seriousness of the problem is unclear for now with the player appearing fairly unaffected as he walked around the stadium but the manager’s remark that he is “desperately” hoping his captain recovers in time had the firm effect of suggesting that he might not. Either way, it would be something approaching a miracle, it seems, if O’Neill actually has everybody available for a couple of matches the importance of which has been greatly magnified by the manner of the defeat last week.

Harry Arter could well come back into the reckoning with O’Neill reiterating his belief after the game that assistant manager Roy Keane and the midfielder will patch things up, but he denied there was anything concrete to support the rumour doing the rounds that Declan Rice is on the verge of committing his future to the cause. Still, he didn’t completely rule out the possibility of a swift return from the 19 year-old.

Rice’s relationship with a section of the support may have been damaged by his bout of indecision but the more pressing issue is probably Arter’s relationship with the management and other players. It has been suggested that team captain Coleman has become involved in the reconciliation process, but it seems significant that neither he nor any of the other squad members asked about the Cardiff City player’s decision to decline a call up on this occasion felt the need to express the slightest hint of public solidarity with him over the past week.

Even as Stephen Ward’s second hand account of the bust-up emerged with its characterisation as almost mundane of the foul mouthed abuse of a player by Keane, David Meyler seemed happy enough to serve as a prop at O’Neill’s pre-match press conference in Wroclaw where the manager cited a training ground exchange they had apparently had last Friday as evidence that these things happen in professional football but life goes on.

After the game, O’Neill would only say that he would “see” if he would call the 28-year-old up again in the event that he does make himself available and there was an underlying sense in every utterance of the manager that he thinks Keane comes out of the spat looking better than the player; a view that, unless Ward’s account turns out to be well wide of the mark, will be seen by many as supporting the argument that the pair are far too “old school,” for Ireland’s good.

It is a charge O’Neill denies often and emphatically although he would probably do well not to keep refuting it at every opportunity by referencing his own experience Brian Clough which does little really to advance his case.

The 66-year-old acknowledged that, with his wider performance bound to be judged on results, the November games have taken on an added importance and that: “considering the situation and that there are only four games in the group, I think you’d have to try and win both if we could.”

That, of course, would be quite a turnaround but O’Neill maintains that things are looking up, at least a little bit.

“It (the performance on Tuesday) was a great boost to confidence but it won’t be easy,” he said. “There are options but naturally if Brady comes back that would be a great boost for us. If we have couple of (other) players back, that will give us an added boost.”

Matt Doherty, he suggested, had done okay having come on here but not enough, it seems, to allay the manager’s ongoing reservations about him as a potential stand in for Coleman while his preference, he insists, to have a left footed player on the other side of his defence at least if, as he did here, he opts for three central players and wings backs.

Shaun Williams and Aiden O’Brien have, he said, done enough to book their places in the squad for next month although anything after that will depend on the strength of the available options.

The general lack of those has prompted some critics to suggest O’Neill, or his employers, to take a much longer term view and willingly put actually qualifying on the back burner in order to concentrate on developing players, and a team, for the future.

Predictably, O’Neill feels people might want to be careful what they wish for.

“In all the years that World Cups and the European Championships have taken place, we have qualified for six competitions… six competitions. Now if that’s what we want; if we want to let these players go, let him go and say, ‘okay, your time is up now David (Meyler)… honestly we’ll do it now, we’ll go in with under-17 players although we might have to take a couple of hits with major competitions.

1 Nadia Power determined to push on to the next level
2 College football turns blind eye to Covid-19 by risking players' health
3 Rugby impasse continues as no deal reached in fourth round of IRFU salary talks
4 The Best Of Times: Harrington stares down Garcia in epic Claret Jug battle at Carnoustie
5 Coronavirus has turned Viktor Hovland into long drive champion
Real news has value SUBSCRIBE
Crossword Get access to over 6,000 interactive crosswords