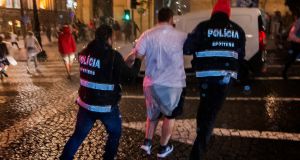 Back in the mid-1980s, when English football was a wild, rust-caked, occasionally frightening place, a group of Leeds United supporters noticed that the National Front had gained a small but significant foothold around Elland Road.

Football was seen as a fertile seeding ground for far-right politics. On matchdays the NF had begun to sell its magazine, Bulldog, outside the ground. They became a visible presence, gained a little traction, took a share of the day.

Eventually there was a reaction. Rob Conlon wrote an excellent article about this on the website Planet Futbol a couple of years ago, recalling the founding of the fanzine Marching Altogether, which staged its own counter-campaign.

Marching Altogether was funny and waspish. Its goal was to mock, challenge and ultimately reduce the racists. The club weighed in. Howard Wilkinson was a vocal supporter of inclusion not division. Vinnie Jones went out to pubs in the city’s mixed areas and met the locals. It was not perfect, of course. But football did stand up for itself. A line was drawn. And on that occasion they did not pass.

Fast forward 30 years to the storm-soaked Atlantic coast of the Iberian peninsula and something else is stirring. Yes, it’s here again. England and abroad; the itch that never seems to get scratched.

Happily there was no real trouble at the Estadio D Afonso Henriques in Guimarães on Thursday night. The Henriques is a sallow, low-slung corrugated hanger of a stadium. The England end was crammed with the usual flags and sheets and proclamations. They came, they stood, they sang about Gareth and coming home and being England till we die, which is a given in any case under current citizenship rules.

Even a shameful crush at the train station passed, by all accounts, without incident. The England fans were just part of the spectacle. But the fear now is that they will be back and in greater numbers in Porto when England’s third-place game becomes just a sideshow for a weekend in the sun.

There has been plenty said and written about the anti-social behaviour of some English people in Porto and Guimarães this week. There is general agreement on the main point. Standing arms-spread in a rococo town square, paunch straining out beneath a St George’s Cross vest, singing songs about bombers you never flew and Irish colonial fall-out you never studied at school, teeth bared at the centre of a sun-beaten, booze-addled face the shade and tone of a collapsed Halloween pumpkin: this is not a good look.

Generally the tone has been either despairing or punitive. How did we come to this? And what are we supposed to do now? And yet there are of course things that can be done, because this is not taking place in a vacuum.

Tommy Robinson was also in Guimarães on Thursday night, dressed in a non-combatant’s camouflage jacket on the 75th anniversary of the D-Day landings and as ever up for the fight in every sense. He was as usual snapped and papped and projected across social media.

This was not a random day trip. Tommy Robinson goes places in order to be Tommy Robinson. His presence is a political act in itself. It works too. The occasion responded. There are reports of England fans chanting his name in bars in town, not to mention sightings of those familiar political symbols.

The poppy has of course been borrowed extensively in recent times, a symbol of remembrance routinely added to football banners as a statement of patriotism. There are flags around referencing the 600-year old battle of Agincourt – not the real Agincourt, an expert military victory for an army of professional soldiers, but the propaganda version, first floated by William Shakespeare, of noble underdog Anglo-resistance to the evil beyond the water.

This is not just pride or celebration. It is certainly not sport. It is identity politics, planted in whatever ground it can find. It is no secret where it is coming from, a spill over from a wider sore in the wider politics. The Brexit movement has long since been co-opted around England football (some travelling England fans were even seen heading pointedly through the non-EU queue at passport control: oh yes, that’ll teach ‘em).

It is of course a very small group of people we are talking about. There are broadly three main types of travelling England fan these days. First the large majority, who are just there to watch football and have a bit of a trip. On Friday lunchtime Porto was full of these England fans, shopping peaceably, eating in cafes, enjoying the sun.

Second and far more visible is the new brigade. Here they come, the 20-something dorks in shorts, the Generation Z football-casual on a spree: singing the songs, doing the walk, taking on the culture like a 1980s mod revival. It is hoolie-lite stuff, stag-do culture, boorish but not exactly sinister or organised.

And finally there are the others, those for whom this is, however dimly grasped, a political thing: the ones in the English Defence League shirts, the ones who like Tommy. It is those moments when group three exerts a critical mass over group two that things might turn ugly; and when group one, the larger majority, can have an influence.

The weekend will, hopefully, pass off with nothing more than a sing-song, some sunburn and a little light-to-moderate banter-vandalism. But this is not a random travelling show these days. There are those in our domestic politics who take an interest in football’s young male sub-culture.

The story of Leeds and a hand-printed fanzine suggests it really is possible to reject this influence, that standing altogether can have an effect if there is genuine support at every level – from the FA, to the admirable Gareth, right down to the powerful, peaceful majority. This is about more than simply bad behaviour. Football has resisted before. Don’t let it pass. – Guardian

1 Rugby Stats: Josh Van der Flier’s versatility keeps him out ahead of his rivals

5 Simon Zebo is heading back to Munster next season