Keith Duggan at the Parken Stadium 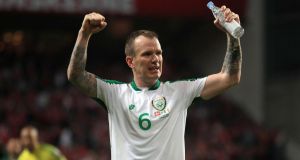 Glenn Whelan reacts after the final whistle of the Euro 2020 qualifier against Denmark in Copenhagen. Photograph: Bradley Collyer/PA Wire

The most annoying team in the world? Probably.

And certainly the most gritty.

A balmy Friday night in Copenhagen and Age Hareide rubs his eyes tiredly on the sideline like a man made suddenly tired by life. Eighty-five minutes gone and the Ireland team are celebrating in front near Kaspar Schmeichel’s goal in front of a delirious band of Ireland fans.

Big Shane Duffy has scored just three times for county and has saved two of those bullets for the Danes. Somehow, the scoreboard reads 1-1 despite a second half in which the Danes have been in champagne mood, fizzing a series of gorgeous attacks everywhere but behind Darren Randolph’s goal-line.

A brilliant headed 76th-minute goal by substitute Pierre-Emile Hojbjerg, who ghosted on to Jens Larsen’s cross before Richard Keogh could complete yet another as-if-your-life-depends-on-it clearance, seemed certain to break the Irish resistance.

But that’s the thing about Ireland. Despite the powerful attacking runs of Yussef Poulsen and the shimmering threat of Christian Poulsen and the rock-star roar that greeted the entrance of Kaspar Dolberg, the blond 21-year-old Ajax striker; despite the jeering chants of the home fans, Ireland don’t get fazed and they don’t go away.

Hareide sent in an Ajax prodigy: Mick McCarthy sent in 30-year-old Alan Judge. The Ipswich player won a free and then delivered the in-swinging ball to which Duffy planted his forehead for another famous goal, another rescued point. Then he left the pitch with a broken wrist.

“We had to change it up,” said a quietly thrilled McCarthy afterwards.

“But his delivery for the goal was outstanding. I don’t know if we could ask much more out of the game. A bloody good side they are. They had some good chances and we were still going at 94 minutes and trying to get a winner. Delighted with the performance.”

It took a while for the occasion to rise beyond the ordinary. By the 40th minute, for instance, the evening had cooled in Copenhagen, the beers were kicking in and Thomas Delaney delivered what was an ostensibly considered pass out to Henrik Dalsgaard. But it was about a foot taller than the Brentford defender and he strained just to make contact with his head as the ball skipped out of play.

A minute later, Dalsgaard hugged the sideline again and was found with another overhit pass. It was a passage of play that underlined the fact that for all the inferred superiority in the tone and remarks of the Danes, they were periods when they didn’t look so different from Ireland.

Yes, the capital city was all very groovy and functional, filled with blissful cyclists and completely devoid of anything like a rush hour snarl. Everything seems to work perfectly. But still, after a hectic and crowded first half in which Darren Randolph was required to make two fairly standard saves, the score between these nations remained a stubborn 0-0.

The Republic of Ireland did nothing to sway Danish opinion of their limited contribution to the beauty within the beautiful game. But McCarthy was happy as he trooped off at half-time.

There was, of course, a bruising truth in Delaney’s observation that Ireland can change its manager but the players remain the same. This is true. And what that meant was the usual rampaging defensive work from James McClean along the left wing; 30 minutes in, Yussef Poulsen would have been quite happy had he been told he’d never lay eyes on the Derryman again. In the 27th minute he clattered into the Leipzig midfielder with such speed that he ended up damaging Glenn Whelan, who was arriving on the other side of Poulsen.

Whelan ended up doubled over in the turf, giving the encounter itself time to catch breath. And the break gave a chance to consider the general wonder of Whelan’s longevity. It was something to behold him out there, 35 years old, recently made club-less and trotting around in the glittering shadow of the apparently Real Madrid-bound Christian Eriksen.

The nation thought he had retired; Whelan assumed he was retired. But the longer this game went on, the more vital he looked to the mechanism that forms the Republic of Ireland football team. As he lay there clutching his ribs, the scary thought occurred that for all the merciless hammerings he has taken in RTÉ studios down the years, Ireland without Whelan is like a watch that will not tick.

“All credit to Ireland. I think we need five goals to beat them,” laughed Hareide later.

Whelan lasted all 94 minutes and trooped off the pitch as the Danes vanished out of the Parken arena, trying to square what they had witnessed with the fact that Ireland are three points clear at the top of this group.

Carefree in Copenhagen. Not a bad way to start the summer.