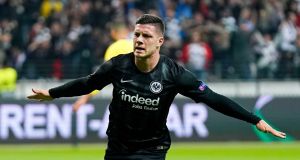 After a season of struggle for Real Madrid, their summer rebuild has continued with the acquisition of Luka Jovic from Eintracht Frankfurt on a six-year deal.

The Serbian forward will cost an initial €65m before add-ons. “Real Madrid and Eintracht Frankfurt have agreed the transfer of Luka Jovic, subject to a medical,” the Spanish club confirmed on Tuesday. “The player will be tied to the club for the next six seasons, until June 30th 2025.”

Jovic joined Eintracht on loan from Benfica in 2017, with the club eventually agreeing to make the move permanent at the end of the past season, in which he scored 17 goals in 32 Bundesliga appearances, as well as 10 in 14 Europa League games.

“From a sporting point of view selling Luka Jovic is a big blow,” said the Eintracht Frankfurt sporting director, Fredi Bobic. “His explosiveness and capacity to score goals propelled us into Europe and we have benefited from more than just his goals in the past two years.

“But it was clear that there was a limit to what kind of bid we could refuse. For Eintracht Frankfurt this is a good and important transfer. We wish Luka all the best in the future. He has all the attributes to have a great career. And we are proud that we have supported him on his way.”

In March, Real Madrid announced the signing of Éder Militão from Porto for this summer, the 21-year-old centre-back becoming the first transfer since Zinedine Zidane returned to manage the club.

Meanwhile, the former Madrid and Spain coach Julen Lopetegui – sacked by both last year – has been appointed as Sevilla’s new head coach.

1 Worst sporting moment: White knuckle ride on a hate-filled night at Windsor
2 Acute disillusionment the only response to growing FAI debacle
3 Shane Lowry right in the mix at Wyndham after brilliant 63
4 Irish roots with the bit of Jo’burg dog: Curtis Campher has arrived
5 ‘Embarrassment, anger, sadness’: the decline of the great Stephen Hendry
Real news has value SUBSCRIBE
Crossword Get access to over 6,000 interactive crosswords