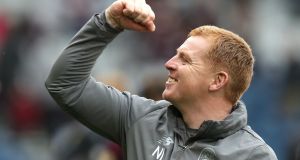 Celtic have begun a probe into the leak of a confidential document outlining their summer transfer plans.

Photographs of the report, which details their plans for some contracted players as well as potential targets in each position, have appeared on social media.

The document came from a meeting between chief executive Peter Lawwell, manager Neil Lennon and other coaching and recruitment staff about two months ago.

The club said they were looking into the matter.

Lee Congerton has since left as head of recruitment but the club have yet to appoint a successor.

Lennon spoke about trying to keep transfer business in-house on Friday when he was confirmed as the club’s manager after stepping in until the end of the season when Brendan Rodgers left in late February.

He previously admitted his unhappiness about team selections being leaked, adding in April that “someone is letting us down”.

1 Eddie Jones’s comments have already provided Irish team-talk for 2021
2 Ireland suffer Twickenham torture yet again as England dominate
3 England 24 Ireland 12: How the Irish players rated at Twickenham
4 TV View: Sunday Bloody Sunday . . . Not Bono’s fault but Boy, that was Bad
5 England held all the aces in defining battle of the breakdown
Real news has value SUBSCRIBE
Crossword Get access to over 6,000 interactive crosswords