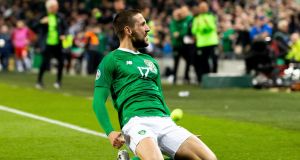 Conor Hourihane celebrates his goal for the Republic of Ireland against Georgia at the Aviva Stadium. Photograph: Tom Honan

Conor Hourihane’s story is worth telling again and again. The 28-year-old didn’t just appear under a hail of tennis balls.

No, his career is mirrored by multiple Irish teenagers who sign terms in England; raw talent ping ponging their way through an opportunity they fail to fully comprehend until it is snatched away from them.

“I don’t see any young lads grabbing a bag of balls and doing extra work, at all the clubs I’ve been at.”

The clubs he’s been at – Sunderland, Ipswich Town, Plymouth Argyle, Barnsley and now Premier League-bound Aston Villa – are more than enough to make this a cautionary tale.

“That’s the sad thing to see – lads don’t realise it. They’re working harder on the table tennis table than they do in training, and that’s the honest truth. The senior lads are out there for an extra hour working on their game. Young lads should see that and take inspiration from it but they don’t.

“It’s their choice at the end of the day. You’ll make a smart remark when you’re walking past them playing table tennis. You don’t give up on them. But there are only so many things you can say and then it’s up to themselves to kick into gear.”

Hourihane’s survival as a professional footballer is what makes him so special.

Comparisons to the late-blooming Wes Hoolahan seem valid. His journey into the depths of English football, ever since Roy Keane lured a fellow Cork man to Ipswich Town in 2010, led to brink of obscurity.

“Very close [to going home]” he confirms. “I went from Ipswich and I was looking for a club and I was fortunate enough that Peter Reid took me [to Plymouth] from a recommendation from the Sunderland connection.

It fell in my lap and I knew I had to take that opportunity. For whatever reason the penny dropped. From that my attitude changed and I’ve never looked back.

“Maybe the likes of Wes and Daryl Murphy had the best years of their career later on, Jonathan Walters as well, so hopefully I can follow in those footsteps. Like I said, I just work hard every single day.

You really have to make huge sacrifices in your career to sustain [yourself] at a good level. I think some young lads in this day and age they don’t realise that.”

Hourihane, as a player, has never been more relevant. For example, his first goal for Ireland will never be forgotten. The free kick against Georgia stalled a supporters’ protest but also gifted Mick McCarthy’s second coming some much needed wiggle room ahead of Friday’s Euro 2020 qualifier in Copenhagen.

“I was in and out with the last manager,” he says of the Martin O’Neill era. “I’m very grateful for the caps he gave me. Looks like this manager has a very settled formation, and a more aggressive style. If I am going to play I’ll know my role, which makes it easier for a player.”

Life, like his career, is only starting to take flight. As the winds of change engulfed the FAI, Hourihane and his wife Olivia became parents for the first time.

“Ora,” he says. “Just before we flew to Gibraltar she was born. It’s been a fantastic time. I feel the last few years have been really on the up and I want to continue that heading into next year.

“Some lads are lucky enough to start in the Premier League or the Championship and sustain that kind of level, whereas I’ve maybe done it the harder way, going to down to League Two. I’m a true believer in hard work.

“Some lads are extremely talented; I’ve got a little bit of talent but I’ve definitely made the most of it over the years. Over the next four or five years I feel they’re going to be the best years of my career.”

But Hourihane’s story, up to these shining days, is worth retelling in his own words. Again and again.

“You have to survive at the start because it’s a cut-throat business. There are loads of players who come over and go home again. I’ve kind of survived the first 10 years and if you’re lucky enough to do that, that’s great. I’m over that hurdle now.

“My mum and dad let me go over to England at 16. Listen, there are plenty of lads who have gone home and done okay for themselves in other walks of life. But I would have felt that I’d let them down. I probably didn’t realise what I had to do to forge a career. A lot of young lads don’t realise that.

“They’re in this bubble of training from 9am to 12pm, coming off the training pitch, having free food, nice breakfast, nice lunch, playing table tennis, playing pool, training in this luxury training ground, heading home and playing on their Fifa and doing no extras.

“Two years later when their apprenticeship is finished they’re going: ‘What am I going to do now?’ And that’s the realisation of it.”

Hourihane was the embodiment of the young player he speaks about.

“And that’s why I say it to them a little bit. I was at Sunderland, nice luxurious training ground in that comfort zone with a comfort blanket. Listen, I was 16 and very young and I didn’t know any different.

“Some of these lads now are maybe 21 or 22. You see lads going on loan now and they come back to the training ground going ‘oh, I don’t want to go back there again’ so you think ‘alright, let’s see what you’re about and work harder then’, and they don’t do it.

“At the end of it, I’m fully focused on my career and I don’t have enough energy to be wasting on others if I’m being honest.”

1 Owen Doyle: Creeping professionalism of schools rugby a threat to the game
2 Six Nations: A 21st-century tournament that saw Irish rugby come of age
3 David Clifford sends everyone back to their corners unbeaten
4 Mike Catt hopes to have Irish backs purring in Six Nations
5 Six Nations: Ireland are contenders but England still the team to beat
Real news has value SUBSCRIBE
Crossword Get access to over 6,000 interactive crosswords