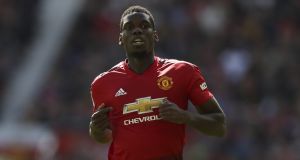 Juventus have made contact with Manchester United to see whether they would consider selling Paul Pogba this summer.

The Serie A champions are keen to sign a world-class midfielder before next season starts and they were initially looking at Lazio’s Sergej Milinkovic-Savic and made an offer of €60m last month but ended their interest in the Serb when Lazio said they were holding out for €90m.

The Turin side, who are looking for a new manager after Massimiliano Allegri departed after winning his fifth consecutive scudetto, have now turned their attentions to Pogba. They have made United aware of their interest in the French midfielder, who played for them between 2012 and 2016.

Pogba has indicated that he would be happy to rejoin Juventus, where he still has a great relationship with Fabio Paratici, the sporting director, as well as several of the players. Juve are now waiting to hear from United whether there is an opportunity to sign Pogba and, if so, at what price.

Juve are not in a position to pay the €105m Pogba cost when he joined the Premier League side in 2016 and could try to include a player, possibly Paulo Dybala, Alex Sandro or Douglas Costa in a deal.

Cristiano Ronaldo’s arrival from Real Madrid last summer for €100m means that the club will have to offload some players if they want to invest heavily in new signings.

They are hoping that the current Chelsea manager, Maurizio Sarri, will take over from Allegri. The Italian has told Chelsea he would like to return to Serie A with Juventus and the Italian champions have met the former Napoli manager and his agent and are expected to buy out the remaining year on Sarri’s £5m-a-season contract to secure him as a successor to Allegri.

Despite Sarri’s position having been tenuous earlier this year, Chelsea had no great desire to sack their head coach of 12 months this summer after seeing him secure a third-place finish in the Premier League and win the Europa League over a tumultuous first campaign outside Italy.

Yet Sarri had made clear in a meeting with the club director Marina Granovskaia 48 hours after the triumph in Baku, that his preference would be a return home, citing a desire to be closer to his family as one of his motivations.

“For us Italians, the call of home is strong,” said Sarri in an interview with the Italian edition of Vanity Fair. “I feel that something is missing. It has been a heavy year. I begin to feel the weight of distant friends and elderly parents I rarely see.

“But at my age, I only make professional choices. I won’t be able to work for 20 years. It’s hard work, the bench. When I return home to Tuscany I feel like a stranger. I have slept 30 nights there in the last few years.”

The 60-year-old, who is in Italy finalising his move to Juve, would have no qualms about upsetting Napoli’s fanbase by taking up the reins in Turin.

“The Neapolitans know the love I feel for them,” he said. “I chose to move abroad last year and not to go on an Italian team. The relationship will not change. Loyalty is giving 110 per cent when you are there. What does it mean to be faithful? And if one day the company sends you away? What are you to do – stay true to a wife you divorced from?”

Sarri’s relationship with a vocal section of the Chelsea support fractured apparently beyond repair this year, with fans unimpressed by his team’s style of play. The club will not fight to retain him, with their search for a successor to see them scrutinise the candidacy of coaches such as Allegri, Laurent Blanc, Nuno Espírito Santo, Javi Gracia, Frank Lampard and Steve Holland.

Their choice will be influenced by whether the next stage of the club’s development will be undertaken under a two-window transfer embargo. Regardless of that ban, they are resigned to losing Eden Hazard, with further talks taking place with Real Madrid aimed at generating more than £100m from the Belgian’s sale.

Petr Cech, whose last game as a player was for Arsenal in their loss in Azerbaijan, will return to Chelsea in a technical role working between the first team and the board. – Guardian