Prosecutors believe that this was driven by gambling, not the interests of the clubs 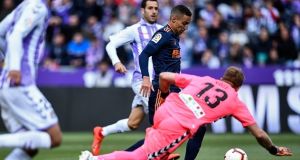 The final-day victory against Valladolid that secured Valencia’s place in the Champions League was prearranged by a criminal gang and up to seven players from the losing side, according to allegations from the judge investigating match fixing in Spain.

Wire taps carried out by police over the past six months, following suspicions raised by a second division game between Huesca and Gimnastic de Tarragona at the end of the 2017-18 season, have now allegedly caught the former footballer Carlos Aranda, suspected of being the leader of the conspiracy, outlining the result required and claiming that seven players had been bought.

According to extracts of the investigation which were published in the newspaper El Mundo, the former Real Madrid and Leeds United defender Raúl Bravo, accused of organising match fixing with Aranda, met the Valladolid captain Borja Fernández in a bar during the buildup to the final game of the season. Fernández then set up a meeting with a number of players.

In one of the recordings, Aranda can allegedly be heard saying: “Look brother, Valencia have to win the first half and in the second, OK?” Valencia won 2-0, with a goal in each half.

Valladolid had secured survival the week before, while Valencia needed to win to take the final Champions League place. Their 2-0 victory denied Getafe the chance to qualify for the Champions League for the first time in their history. There is no suggestion that Valencia were involved in the conspiracy in any way or were aware of it.

Prosecutors believe that this was driven by gambling, not the interests of the clubs. The initial investigation began when the league alerted to suspicious betting patterns at the end of last season in the second division; now the investigation has expanded to include this highly significant first-division match.

In one of the recordings, according to El Mundo, Aranda is heard telling someone: “No one can find out about this and no one means no one, eh. Not your friends, no one.” That same day, wire taps are said to reveal that he called the bookmakers he owns in Málaga and said: “Bet €10,000 and you’ll take €20,000.”

He and Bravo were among those arrested last week, accused of leading the criminal gang. They were released on bail having been in jail in Zuera, Zaragoza province. Fernández was also arrested.

All three have denied any wrong-doing. Borja’s representatives put out a statement saying that that the player does not even bet and his agent, Gustavo Mateos, told Radio Marca: “He has no doubt about his honour but he is worried. He has asked me to tell the people of Valladolid not to doubt him, that they [can]trust in their captain. Everything will be cleared up. He is sunk. He answered every question: he is the person most interested in finding out what has happened.”

When Aranda was released from prison he said: “In the end, they have put in [prison]those who have the least guilt. I would like to thank the people from the jail, the people from Zaragoza in prison and Huesca. We don’t know why [we’re here]. That’s why we came, because we don’t know [why]and nor do they.”

Raúl Bravo said: “Thanks to the local police, the national police, civil guard, judge and fiscal because the truth is that the treatment has been spectacular from the start, they have treated us very well and I can’t say anything more. At trial, who is guilty and who is not will be seen.”

1 Gordon D’Arcy: Change has to happen before Ireland's trip to Paris
2 Out of Bounds: Patrick Reed helping make the ‘C’ word less taboo
3 Kevin Seaward: ‘The first time I wore the Vaporflys, I hated them’
4 IRFU not consulted prior to Minister Harris’ recommendation to cancel Ireland v Italy
5 Cheltenham keeping a watching brief on coronavirus
Real news has value SUBSCRIBE
Crossword Get access to over 6,000 interactive crosswords