Ken Early: O’Neill promises Euro qualification, but who believes him? 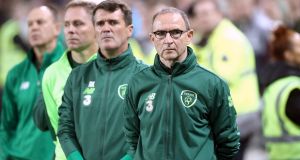 Martin O’Neill and Roy Keane at the Aviva before the Wales game. Photograph: Liam McBurney/PA Wire

Ryan Giggs had been and gone, congratulating his players on getting the win and keeping the clean sheet against the tough, physical, aerial challenge of Ireland. Martin O’Neill had also done his official post-match press conference, and now in a small adjacent room he was speaking to a smaller group of newspaper journalists for the Thursday and Sunday editions.

Here the questions focused less on the game and more on O’Neill’s state of mind. Are you hurting? What do you say to those who question your hunger and desire? Are we lacking confidence? Have you begun to doubt yourself?

In the face of so many questions hinting at the negative, O’Neill’s answers necessarily took the form of positive statements about himself and the team. If he didn’t have hunger and desire he couldn’t have made a career in management, the players are hurting after this defeat and that is an encouraging sign, and so on. He had said a couple of minutes earlier in the press conference that he questioned himself all the time as a player and as a manager; now he insisted that this self-questioning had never turned to self-doubt.

The conversation had turned to the question of whether the Euro 2020 qualifiers next March were seen as the “real” games, when the Ireland manager abruptly offered an uncharacteristically bullish prediction.

“At the end of the day, we’ll have people ready for the games, and I’ll be ready, and ... we’ll go through. Simple as that.”

Doubtful glances darted about the huddle. Did he really just say “we’ll go through”, just like that?

“We’ll go through to the Euros?”

Still the journalists could not quite be convinced that this was not all some unfortunate misunderstanding.

“We’re good enough?” “You mean go through to the finals?”

“What gives you that optimism when – ”

Maybe all the positive self-talk he had had to do to answer so many negative questions had induced in O’Neill a sudden spike of heady confidence. Or maybe it’s become so hard to make a case for himself based on facts that he’s now reduced to offering one based on faith. Either way, this is the sort of promise it doesn’t cost O’Neill anything to make. Either we qualify for the Euros, which makes him Mystic Martin, or we don’t, in which case he’ll be gone anyway.

The obvious problem with arguing that you will win future matches “because I’m good” is that people wonder why you being “good” wasn’t enough to win any recent matches. When you look at O’Neill’s career as a whole he certainly has been good. The more doubtful issue concerns how good he has been lately, and how good we can expect him to be in the future, after everything that has happened.

Ireland had a massive stroke of luck when both Denmark and Wales turned up in Dublin missing their best players, but rather than seizing the moment to take advantage, they only confirmed the impression of a team that is confused and low on confidence. The general sense of anxiety was personified in the performances of Harry Arter, whose recent bust-up with Roy Keane will go down as one of the more stupid episodes in the history of the Irish international team.

Given that Stephen Ward’s account has now been tacitly confirmed by several parties to what happened, it seems plain enough that most of the fault lay with Keane. Assistant managers are just helpers to the players as well as the manager, and they don’t get to go around shouting the odds.

O’Neill couldn’t do much about the initial row but he might have taken a more active approach to dealing with the subsequent tensions. He seemed content to treat it as something that could be left to Keane and Arter to sort out in their own time. You imagine he might have handled things rather differently if it had been Seamus Coleman or Robbie Brady who was refusing to turn up after a similar falling-out. That apparently relaxed attitude towards the impasse didn’t suggest that he saw Arter as a particularly important player for the future of the team.

And yet a few weeks later here was Arter, restored not only to the squad but to the heart of the Irish midfield. O’Neill had said this was an opportunity for him to “prove us all wrong”, which seemed an odd thing to say, suggesting that Arter was beset on all sides by critics and doubters, when in fact the players generally see him as a decent team-mate and most fans look on him as a useful Premier League midfielder.

Arter may not be the only one who now wishes that he had decided to continue the feud rather than return to the fold. Against Denmark and Wales, he played like a man who was agonisingly aware that Roy Keane was sitting just a few metres away, eyes narrowed and lips pursed, critically scrutinising his every move.

There was a moment in the first half against Wales when Arter received the ball in space, but failed to see any suitable forward passes and eventually turned to play it back to a defender. He shouted to his team-mates to provide better options and there followed an exchange with O’Neill on the sideline. O’Neill seemed to suggest that Arter should have passed left to James McClean. Maybe a player with more confidence would have made that pass.

McClean, of course, had said his piece during Arter’s brief exile, declaring that Arter was wrong not to turn up and that he, McClean, would never be deterred from representing his country. The intervention seemed unnecessary and a touch self-aggrandising. McClean was essentially saying: who cares about the details of what went on between Arter and Keane, the important point here is that I love Ireland and I don’t care who knows it.

(One almost hopes that McClean doesn’t notice O’Neill’s remark after the Wales game that “it would be fantastic if every single player playing for us came from Leinster, Munster or Connacht.” As his fellow Ulster man would remind him, the number of green fields is four not three: we’ll see if McClean can refrain from publicly blasting the manager for this gaffe.)

Arter went on to concede the free-kick from which Wales scored the winner with a disastrously bungled tackle that condensed several different mistakes into one action. It was just the sort of thing that happens when you are having a nightmare. Ultimately it is Arter’s responsibility to perform but his struggle seemed symptomatic of more general problems affecting the team – the feeling that people are not quite sure of their tasks, the wider sense of drift and unease and latent rancour.

The irony is that while O’Neill tries to project an air of certainty that we will qualify “because I’m good”, his players have no certainty about how the team is likely to approach the next game. Will it be a back three or a back four, will several of them have to play out of position to make it work, will they have any time to work on the plan in training or will they just have to figure it out after they arrive at the stadium? This lack of a clear team identity beyond a stale string of abstract nouns – “spirit”, “desire”, “commitment” – is the big disappointment of the O’Neill era.