Thousands celebrated in Zagreb as Croatia came from behind to defeat England 2-1 in the World Cup semi-final, setting up a clash with France in Sunday's final. Video: Reuters 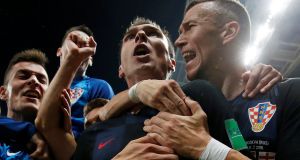 Croatia’s Mario Mandzukic celebrates scoring the winning goal in their World Cup semi-final against England having earlier been dragged off in agony. Photograph: Carl Recine/Reuters

Everybody has a plan until they get punched in the mouth. England’s plan was working perfectly until the 65th minute here in Moscow, when that fateful punch in the mouth arrived in the form of a football to the groin.

Kyle Walker had showed impressive resilience in scrambling to his feet to make another clearance after he had been felled by a hard shot from Ivan Perisic that hit him squarely in the testicles. Only Walker knows how long he was preoccupied with the shock of the impact. All we can say for sure is that, after taking a minute to receive medical assistance, Walker returned to the field and was promptly beaten to a cross by Perisic, who ghosted in front of him to nick Croatia’s equaliser with his outstretched studs.

High foot? Or low head? Either way, it was tremendous movement from the Croatian winger, who stole in on the blind side of both Kieran Trippier and Walker to meet the cross from Sime Vrsaljko, unnoticed by the England defenders as he had been unnoticed by most of the people in the stadium for most of the match. Nobody need remember how anonymous Perisic had been before then, history records that he scored the unexpected equaliser that sent the “It’s Coming Home” hype train suddenly plunging off the tracks and into a bottomless Balkan ravine.

For the third time in this tournament England had been stunned with an equaliser out of nothing and as against Tunisia and Colombia the sudden setback hit them hard. There had been a sense of destiny developing around their team in this tournament, the euphoria of the fans, the sense that finally, unbelievably, things were going their way.

The downside of surfing such a wave of confidence is that when you come off it, the chaos can make it hard to get your bearings. Which way back to the surface?

It had all started so well. Unlike Tuesday night in Saint Petersburg, the occasion felt like a World Cup semi-final. Thousands of England fans had flown into Russia to get the bandwagon going and for the first time Red Square had resounded to chants of Ten German Bombers and other favourites. The English belted out Three Lions in a raucous pre-match atmosphere. At the other end was an equal number of Croatian fans who displayed an ingratiating banner: “Thank You Russia!” before launching into a series of chants that sounded less diplomatic.

Throughout the first half Croatia displayed the nervous agitation of men who realise that if they make a mistake in midfield, Raheem Sterling could be in with only Dejan Lovren and Domagoj Vida between him and goal. England looked much more secure in defence, with Walker and Harry Maguire easily able to contain willing but slow Croatian wide attackers in Ante Rebic and Perisic. Croatia’s key midfielders Ivan Rakitic and Luka Modric don’t like to get ahead of the ball, so there was little support coming from midfield for Mario Mandzukic.

England’s goal after five minutes was their 10th from a set-piece from the 12 they had scored so far in the tournament, and while Trippier’s 25-yard free kick was struck beautifully you did wonder whether Croatia’s keeper Danijel Subasic might have made some attempt to save it. Subasic went down with an apparent hamstring injury in extra time against Russia, and hamstring injuries don’t tend to clear up in four days, but when a country the size of Croatia gets to a World Cup semi-final the players are required to take a mind-over-matter approach to injuries.

They also have to take a mind-over-matter approach to fatigue. As extra time approached, Gareth Southgate must have felt confident his team could be stronger in the final period. Eight of the 11 Croatians were born in the 1980s, while the only England player from that decade is Ashley Young: Croatia had also beaten Denmark and Russia over 120 minutes, while England had coasted against Sweden and taken a holiday for their third group match against Belgium. The England players must have taken heart from the sight of the exhausted Modric leaning to rest with his hands on his knees every time the ball went dead.

But what Croatia’s old men lacked in running power they made up for in experience and sheer courage. In the first half of extra time, Mandzukic went for a ball at the near post against Jordan Pickford, whose studs dug painfully into the onrushing striker’s knee. Mandzukic was clearly in agony as they dragged him off the pitch, where his body disappeared in a large cloud of spray as Croatia’s medics worked frantically to numb the pain.

The knee would have had to be crushed for Mandzukic to come off and if it turned out that he never played another game, he might still say that staying on the pitch was worth it.

Four minutes of the second half of extra time had been played when Perisic jumped for a header against Trippier and sent it unexpectedly backwards into the area, where Mandzukic had read his intentions before John Stones and Walker. He smashed a fierce shot across Pickford and into the corner. England were behind for the first time in the tournament and they had nothing left. They pumped long balls like England of old but their uncanny ability to score from aerial attacks had at last deserted them. Croatia have become the smallest country to reach the World Cup final in almost 70 years.