Nation may expect, but this group of players not stirred by the old ‘up-and-at-em’ game 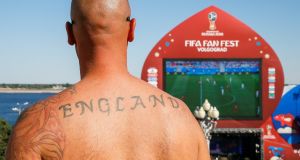 Only 2,500 England fans are expected in Volgograd. Photograph: Gleb Garanich/Reuters

Two years ago this month more than 10,000 England fans took over Marseille’s Old Port for three solid sunburnt days of drinking, singing and fighting in the build-up to their match against Russia at the Stade Velodrome.

On Monday, England begin their World Cup campaign against Tunisia in Volgograd, where the weather on Saturday afternoon was even better than it had been in Marseille – the sun beating down from a brilliant blue sky, baking the sandy banks of the Volga – but of the England fans there was almost no sign.

Only 2,500 were expected to turn up for the match, which is a big change from the days when more than 60,000 England supporters swarmed into Frankfurt for their team’s first match of the 2006 World Cup.

Of course, it’s easier for English people to get to Frankfurt than to Volgograd, but English supporters have not been put off by long journeys before. Some 15,000 trekked across the highveld to Bloemfontein in South Africa to watch England lose 4-1 to Germany in 2010, and 5,000 journeyed to Manaus in the heart of the Amazon rainforest to see the 2-1 defeat to Italy in 2014.

“I think there’s obviously been a lot of stories leading into the tournament that have put people off coming,” Gareth Southgate said at the Volgograd Arena on Sunday. No doubt that is true; some people must have been put off by the prospect of getting beaten up by the sort of Russian hooligans that ran riot in Marseille, though the prospects of such organised violence happening in sleepy Volgograd seemed remote.

Yet there is also a palpable sense that the standing of the English national team has collapsed since the peak of Golden Generation hype in 2006. People are drifting away.

The English used to be famous for the delusional optimism with which they approached every tournament, but too many disappointments have seen that gradually curdle into a kind of grim fatalism.

Consider their experience at the last World Cup. In the weeks leading up to the tournament it became popular to say that the media coverage had heaped too much pressure on the players, and that the team might do better if the press reined in expectation somewhat – be a little more respectful, a little less demanding. Roy Hodgson was applauded for a bold squad selection that looked to the future – as though there was ever any point in seeing a World Cup as preparation for the next World Cup.

The efforts to drop the pressure made no difference, England wilted just the same. 2014 was their worst ever World Cup performance: three matches, two goals, one point. Only five of the 23 players Hodgson chose in that futuristic 2014 squad have made it back to the World Cup four years later.

Maybe it was just as well that the England crowd did not show up to repeat its performance in France. It seemed unlikely that Volgograd, a quiet and low-density city, would have had the drinking infrastructure to cope with such an invasion, and this is not the place in which to boast about winning the second World War.

Volgograd lives in the shadow of its history; there are memorials everywhere to the Battle of Stalingrad, and a 85m statue, The Motherland Calls, looms on the height of Mamayev Kurgan overlooking the stadium. A Brazilian reporter asked Southgate and Harry Kane to say what it meant to play at the site of such momentous events. “To see the statue and to have an understanding of the history reminds you that some things are even bigger than football,” Southgate offered. Kane: “The history, it is what it is.”

“The players of the past are gone, this team is looking at things in a different way, trying to play in a different way. They have a lot of hunger, a lot of desire, we have better technical players than we’ve had in the past coming through our academies.

“They have a hunger to press and win the ball back, they want to play brave football, they want to be a bold attacking team. That’s why I joined the FA as under-21s coach, because I believed young English players could show something different.

“There was a perception of them across the world, a perception of English football, and I thought it was possible to change that. I’ve seen through our youth teams that’s started to happen, now we’re looking to convert that to the senior team.”

Maybe Southgate is correct that English football culture is morphing into something else in a revolution led from the bottom up, without the game’s establishment really noticing yet.

When he talks about the perception he means the age-old stereotype of kick and rush – “gammon” football if you like – of which you still see plenty in the Premier League, thanks to old school coaches like Sam Allardyce and Tony Pulis. But England’s World Cup players were mostly born in the 1990s. They’ve grown up watching Barcelona, studying Lionel Messi’s skills on YouTube and playing video games in which it’s more effective to pass short than hoof it.

Middle-aged football fans might think the instinct to go long is somehow etched into the English soul, but these players have grown up in a world where no really successful or admirable team still plays that way.

Might the “traditional” British up-and-at-em game be another relic of old Albion that is being washed away by globalisation?

Love tears them apart in stunning Epsom Oaks romp 16:33
Valterri Bottas pips Lewis Hamilton to pole in Austria 15:43
Chris Martin steals a point for resurgent Derby against Forest 15:23
Brighton see off doomed Norwich to edge closer to survival 15:09
Eamon O’Shea: ‘We spent quite a bit of time talking about older people rather than to older people’ 08:00

1 Eamon O’Shea: ‘We spent quite a bit of time talking about older people rather than to older people’
2 Love tears them apart in stunning Epsom Oaks romp
3 Monica Seles: The warrior queen who could have been the best ever
4 Sport crosses its fingers yet again as ministerial merry-go-round gets another spin
5 Valterri Bottas pips Lewis Hamilton to pole in Austria
Real news has value SUBSCRIBE
Crossword Get access to over 6,000 interactive crosswords