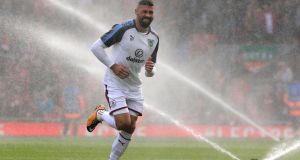 Burnley striker Jon Walters is out of the Ireland World Cup qualifiers against Moldova and Wales with the 34 year-old set to be sidelined for several weeks, it seems, by a knee injury.

“Walters is not is the squad,” said Martin O’Neill as he named a 32-man squad for the games at the Dublin headquarters of Aviva on Tuesday afternoon. “He’s out and will be out for a number of weeks. That’s a real blow to us.”

The veteran striker has been a key player for O’Neill over the last couple of years and the northerner described his absence for such important games as “a massive blow,” returning to the subject on a number of occasions over the course of his press conference.

He insisted, however, that his side have coped without big players before and that it will be down to those who are available to rise to the occasion once more.

In Walters’ absence Scott Hogan could feature in what will be his first spell with the team. The Aston Villa player has completed the formalities of obtaining a passport and O’Neill confirmed that the 25-year-old is now eligible and, fitness permitting, available for Friday week’s game against Moldova.

Millwall striker Aiden O’Brien is also included in the squad along with Preston’s Sean Maguire. Shane Long nevertheless remains the most likely to start up front but O’Neill insisted that he is happy with his other options.

“It’s nice to have it (the paperwork on Hogan) through,” said the manager, “and he is available to us now so that is good.

O’Brien, he suggested, has made steady progress at Millwall, who O’Neill will watch at home to Reading this evening while “Daryl Murphy has been fit for a while, which is good news, and (David) McGoldrick has been back showing a bit of form”.

Keiren Westwood is a doubt for the double header with the Sheffield Wednesday goalkeeper struggling slightly to overcome a rib injury and O’Neill has named four goalkeepers on the basis that he may yet lose him. Meanwhile Harry Arter is a slight doubt but Jeff Hendrick returns having featured for his club at the weekend.

James McCarthy is included in the squad although the Everton midfielder is only due to resume full training at his club this week and so it is far from clear whether he will actually end up joining up with the Ireland squad next week.