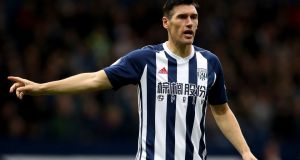 If Gareth Barry was beginning to feel frazzled by a morning of media commitments at The Hawthorns, the message that popped up on Phil Neville’s iPad brought home the reason all this was happening. Neville was interviewing his former England team-mate for television and Barry was genuinely touched to be shown a recorded offer of congratulations from Ryan Giggs, who is only a vague acquaintance but had made contact to acknowledge the passing-on of his Premier League appearance record.

The handover will be formalised on Monday when Barry starts for West Bromwich Albion at Arsenal, making his 633rd top-flight outing and confirming his place in the modern history books. “I’m not going to argue with Ryan about trophies and things like that,” Barry says in response to some light ribbing from Giggs about the difficulty of their respective achievements. “It was lovely to hear from him. I’m aware he’s played in the old First Division before and collected a few more appearances than the 633. I’m also aware the Premier League started in 1992 and records existed before that too. I’m not here to say I’m top of the tree in English football history.”

Giggs played 672 league games in all; it is commendable self-awareness from Barry in an era when it sometimes feels less-recent history is too readily bulldozed but there is no taking away what the 36-year-old has accomplished since making his Aston Villa debut on May 2nd, 1998. Barry has been metronomic throughout his career, lauded by those who know him for his steadiness on the pitch and off it, and it is striking to hear that another milestone Giggs passed has not escaped his attention. He is yet to feel himself slowing up, self-doubt only fleetingly rearing its head on the back of the occasional frustrating result; could he, too, carry on to the end of his fourth decade?

“It’s definitely a possibility,” comes the reply. “I was 32 when I signed for Everton and Roberto Martínez said: ‘With your style of game you can play until you’re 40.’ I’m sitting there laughing at him but he was deadly serious. I still laughed. It’s still going to be tough but for a manager to tell me that four or five years ago was a good compliment.”

Barry often appears inscrutable but nobody can apply themselves for this long, with such an unspectacular but relentless form of excellence, without something raging within. There were whispers of late-career interest from Major League Soccer but that was never for him. Nor was the prospect of a slow fade at Everton, his rejection of a contract extension in the summer in favour of a more prominent role under Tony Pulis coming as a disappointment to Ronald Koeman but embodying his addiction to the battle.

“I didn’t really enjoy the last three or four months at Everton sitting on the bench,” he says. “Part of me thought staying there would be an easier way to end your career. Less pressure on you, you’re not going to be starting games, less expected of you. But the other part said: ‘It’s too easy to go down that road, come to another challenge.’ It might be tougher but I didn’t want to fizzle out. I could still have got enough appearances to achieve this record but I wanted that one last major challenge.”

There have been many of those and, when the time comes for a valediction, he may at last find time to luxuriate among the videos and clippings his mother, Linda, diligently curates back home in Hastings. He remembers being replaced by Edin Dzeko on the biggest occasion of all, with Manchester City 2-1 down to QPR on the final day of the 2011-12 season, and sitting next to James Milner on the bench with the pair fretting they had blown the title. The rest is history but Barry prefers to focus on the present day and, again like Giggs, has found yoga useful in prolonging his career.

“As a player who’s been around a while you’ve got an old school mentality,” he says. “When somebody mentioned yoga for the first time I just looked at it and thought: ‘This isn’t for me, it’s for an older woman down at the health club trying to get supple.’ But I thought: ‘No, I can see the benefits there, I’ve got to embrace it.’ It can be hard work sometimes but you come away feeling much better. I’ve gone with things like that rather than saying I’ve never done it or needed to do it.” It has helped Barry since he left Villa eight years ago and as many as “six, seven or eight” of his current team-mates join in.

Aside from a remarkably lean physique that has hardly gained fat since his teens, that is as far as the obvious secrets to his longevity go. Barry still enjoys a pint after matches with his family and expects to do the same at Arsenal; there is no hair shirt, no particular asceticism, and perhaps that has been as big a factor as any other. In almost two decades, he does not think much about his approach has changed. “One of my strengths is focusing on football, and even in the summer I try not to switch off too much,” he says.

That level of attention is harder to attain for those coming through now, he believes. Barry does not use Twitter but that puts him among the minority nowadays and he fears social media adds an extra level of complexity to footballers’ development.

“When I was growing up as a teenager I didn’t have to worry about any of that,” he says. “Now as a player you’ve just got to be on your toes all the time. You just go to fill your car up and there will be somebody wanting to film you, trying to do something silly like that. If you go into a shopping centre there are social media and cameras everywhere and if you’re doing the wrong thing you’re ultimately going to get found out.

“So it’s important you’re living your life right and it’s hard for a young player. Sometimes you want to experience life but ultimately you’ve got to make sacrifices and choose the right road.”

Had things worked out differently for Barry, he might even have been outstripping Giggs while wearing an Arsenal shirt. Arsène Wenger said on Thursday he had hoped to sign Barry from Villa in 2009 and the player says there were “a couple of conversations with representatives”. There was interest before Barry left City for Everton, too. “It would have been good to work under him but that didn’t happen,” he says but there is no suggestion of regret.

The knowledge that a career such as his will be far more difficult to come by for today’s youngsters, too often squeezed out by the bigger clubs, makes gratefulness a stronger theme. “I’m immensely proud to get there,” he says of his record. “Whether it will stay around for long I don’t know. It’s certainly harder for younger players to break through now like I did. There’s a lot more rotation in terms of selections. So it may be tough to beat and the longer I can go it will be tougher as well.”

It will also become more likely that, sooner than he may have imagined, Giggs finds himself fronting another video of goodwill.