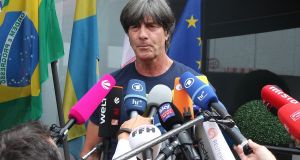 The most amazing thing about Germany’s World Cup exit at the group stage is that the sun still rose this morning. You wouldn’t have thought so on Wednesday evening. Anyone who was walking the streets of Berlin kept staring into the empty faces of people trudging zombie-like to the next tube station and felt like an extra in some post-apocalyptic drama.

One can understand why those fans were shell-shocked. If you count the Confederations Cup as a big tournament, Germany had reached eight semi-finals at major events in a row since 2005. Quite apart from the fact nobody has ever achieved anything remotely like this before – not even one of the many fine Brazilian teams in history, not even the Germans themselves previously – it lulled the country into a sense of security that turned out to be very false indeed.

Make no mistake, there had been warning signs before the national team left for Russia. Not the fitness debate surrounding some players, most notably Manuel Neuer. That was par for the course, as Germany always go into a World Cup haunted by injury worries. No, it’s rather that a strange mood had engulfed the team in the weeks before the tournament.

The preparation matches were sluggish, like the group games that followed. Then there was the debate triggered by Mesut Özil’s and Ilkay Gündogan’s meeting with the Turkish president Recep Erdogan.

It was shocking to hear German fans booing German internationals. It clearly got under Gündogan’s skin and while Özil outwardly remained his inscrutable self, we can assume he was shaken as well.

Finally, there were reports about two camps in the squad; the established players who won the World Cup and the hungry youngsters who lifted the Confederations Cup. The rift was probably not as deep as some observers claimed, but everybody could see that there was a world of difference between players who were hungry and eager to prove themselves – think Marco Reus and Julian Brandt – and most of the veterans.

For the first time, either as assistant or head coach, Joachim Löw failed to create team spirit, traditionally the side’s biggest strength. Löw must have sensed it, because this concern was probably why he did not call up Bayern Munich striker Sandro Wagner and cut Manchester City’s Leroy Sane from the squad. Two players with a bit of an ego.

Even the fans seemed unprepared for the tournament. There were far fewer Germany flags on display than we have become used to since the 2006 World Cup. One theory says the rise of the political right has reintroduced scepticism about the use of national symbols. Another points towards a growing disillusionment with football in general, epitomised by all those fan protests during the Bundesliga season just past. Personally, I think the fans were just like the players – tired.

First, Löw has to step down. No, this is not a populist call for heads to roll, I’m merely stating the obvious. Actually, there are many good reasons why he should stay on, starting with the fact that his only logical successor is unlikely to leave Anfield any time soon. But the unwritten rule says our national coach has to resign if the team is knocked out in the quarter-finals of a tournament. Löw would probably have been the first Germany manager to break this, and may even have kept his job if the team had been eliminated in the round of 16 by the likes of Brazil. But the group stage? No way.

The national team is an institution like Volkswagen, or one of the major parties. And of course Volkswagen chief executive Martin Winterkorn resigned in the wake of the emissions scandal, stating: “I am doing this in the interests of the company even though I am not aware of any wrong doing on my part.” And, of course, a party leader steps down after an awful election result, simply because it’s his responsibility.

Also, there is really no alternative. To stay with the political analogy – if Löw decides to continue he’ll be a sitting duck, pretty much like Social Democrat Martin Schulz, who opted not to resign after his party’s September 2017 election debacle. But of course his public standing was so damaged that he belatedly threw in the towel five months after the historic defeat.

But a new national manager won’t be enough. Another reason why Germany’s early exit wasn’t totally unexpected was the fact the recent European club seasons were a disaster for the Bundesliga. Since the 2014 World Cup, only four German clubs have reached the quarter-finals of the Europa League and not one made the semis.

There will be calls for a radical rethinking – and that usually means an attack on the 50+1 rule (which prevents our clubs from being owned or controlled by individuals or companies). However, for anyone who cares about the national team, this would be the worst possible scenario. All examples from abroad indicate that deep-pocketed investors are not interested in grooming homegrown talent, as this takes time and is hardly glamorous. Provided those investors who are supposedly waiting to sink large amounts of cash into our clubs do really exist, their money is going to buy expensive foreign stars who will relegate German talents to the bench.

So we have to continue on the path we have chosen – but we should also ask the one question that is truly worrying. It is a question not only raised by the performance of the team in Russia but also by the fact that Borussia Dortmund, widely lauded for their youth movement, had only one player in Germany’s World Cup squad as the talent the club nurtures tends to be foreign: Christian Pulisic, Ousmane Dembele, Jadon Sancho.

The question is: did we win the 2014 World Cup because our famous Talent Development Programme worked a treat and produced amazing players, or did we simply luck into one golden generation and now have to wait until the hand of fate deals us the next?