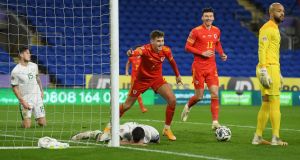 Nobody said it was easy, no one ever said it would be this hard . . . Watching Ireland lose to Wales, that whining phrase from a Coldplay song bobbed unpleasantly to the surface of the subconscious, an unavoidable earworm, the appropriately insipid, mildly dispiriting accompaniment to the longest run without a goal ever achieved by the Republic of Ireland football team.

The closest Ireland have been to this was a five-match goalless run spanning the end of Jack Charlton’s time in charge and the beginning of Mick McCarthy’s. Martin O’Neill managed four 0-0 draws in a row at the end of his time in charge. Six games without a goal is uncharted territory.

It means that Ireland are nearly halfway to breaking Northern Ireland’s world record of 1,298 minutes without a goal, set over two magical years between 2002 and 2004. At least when Northern Ireland were rechristening themselves Northern Ireland Nil, their fans were there to sing funny songs about it.

Stephen Kenny had revealed before the game that in an effort to rally the team’s confidence, he’d showed them a montage of the chances they had created in some previous matches, just to remind them they had been making the chances even if they hadn’t been scoring them. It turns out he can use the same montage ahead of the Bulgaria game on Wednesday since there will be essentially nothing to add from Cardiff. James McClean’s cross-shot from the corner of the six-yard box was Ireland’s only effort on target until James Collins came on for the last quarter-hour and adopted a shoot-on-sight policy, turning and shooting regardless of his position on the field, each shot flying hard and low and straight at Danny Ward in the Welsh goal.

Afterwards Kenny praised the players for their intensity, their mentality, their willingness to give everything of themselves – but the Ireland manager was at a loss to explain why they have apparently forgotten how to score. He pointed out that Wales hadn’t had many chances either, at least not until the closing stages when Ireland were chasing the game, but soon he had drifted away from the uncomfortable subject of goalscoring to compliment Kevin Long for how well he had performed at left centre-back.

In this test of faith, memory can be our friend

The special difficulty Kenny faces, coming to the job having worked mainly with Irish clubs, is that with every bad result, with every failure to score, the temptation builds to say this isn’t working, and not only that it isn’t working but that it cannot work, that it cannot work because Kenny is not cut out for it, that he simply lacks the magical qualities of leadership that can only be bestowed by success at no lower than Championship level in English football.

It’s part of the same process that had Kenny being asked if he was “concerned” about Matt Doherty saying he was “a bit embarrassed” coming off the field after recent matches and that Ireland needed to “wake up”, as though this was some defiant and mutinous outburst, rather than a statement of the obvious from one of the senior figures in the squad, who presumably feels a responsibility to lead.

In this test of faith, memory can be our friend. Remember that the turmoil created by Covid-19 and injuries has made it extremely difficult for this team to develop any sense of identity or rhythm. The line-up has changed unpredictably from match to match, regardless of who is and isn’t playing well, and the team has been without key players in every game. Of course injuries are a normal part of football, but the scale of the problems that have hit the team in this period are without precedent going back as far as the 1980s.

Remember also the events of the matches, which in most cases could have gone either way. There have been sliding-doors moments, notably in the Slovakia game, where Alan Browne missed a couple of chances to write himself into history. There was more of the same against Wales. Neco Williams’s handball in injury time was a cast-iron penalty for Ireland by the refereeing standards of 2020. Unfortunately 2020 standards are impossible to apply in the absence of VAR, and the referee missed it, like he missed Joe Morrell’s kick-out at Jayson Molumby in the first half. Instead of Ireland having a chance to equalise from the spot, Wales broke forward and Jeff Hendrick was sent off for chopping down Tyler Roberts.

Most of all we need to remember what has happened over the last few years of Irish football, though this is not easy, since so little of it has been memorable or worth remembering. The bill has come due not only for John Delaney’s years of misrule and the big-picture organisational shambles of the game in this country, but also for the flight from modernity under Giovanni Trapattoni and Martin O’Neill, until we had become a team that attempted only the most basic football imaginable, and latterly could not even pull that off.

We had to change, and we have simply been unlucky that just at the moment when Kenny steps forward to lead that change, circumstances have made a mockery of all his plans, and turned the renaissance into a farce.

But remember this too will pass. Somebody will score and the team will remember how to do it. Even Northern Ireland Nil eventually scored, and remember that when they did, the fans celebrated as though they had won the World Cup. It’s one of the consolations of football. The worse things get, the happier you are with the little victories.