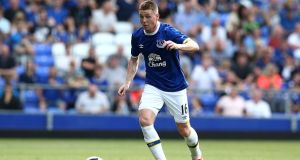 James McCarthy is yet to return to full training with Ireland but will join up with the Ireland squad for Georgia and Moldova. Photograph: Getty

Keiren Westwood is a doubt for Ireland’s World Cup qualifiers against Georgia and Moldova after picking up a leg injury in Sheffield Wednesday’s game against Brighton on Saturday.

The goalkeeper had apparently been ill beforehand and visibly struggled to get through the first half during which his situation was made worse by an injury that left him unable to kick the ball with any force.

“He was sick,” said his manager, Carlos Carvalhal, afterwards, “but he tried to play and played but after he felt something on his leg. He can’t kick the ball, as I understand.”

The goalkeeper was due to have tests to gauge the scale of the problem but as things stand he looks to be the most prominent of the doubts for Thursday’s home game as the squad assembles on Monday. As things stand, that would leave uncapped Daniel Rogers as first in line to replace Darren randoplh in the event that the West Ham goalkeeper suffered some sort of problem.

James McCarthy is expected to join up with the squad despite having not returned to full training at Everton since undergoing surgery on a groin problem a month ago. Ronald Koeman acknowledged last week that the player was entitled to travel under Fifa rules and was determined to do so but urged the republic of Ireland’s management team to be careful with a player who is clearly not fully fit.

Kevin Doyle appears unlikely to travel from the United States to join up with the squad. The striker has been struggling for a week or so with an ankle injury and appears not to have had any word by Sunday afternoon as to whether he should make the journey or not.

There is also some doubt about Stephen Quinn who did not even make the bench for Reading at the weekend, prompting speculation that he is injured although there has been no confirmation either way from the club.

Daryl Murphy was again omitted from Newcastle United’s match day squad for the 1-0 win at Rotherham with the striker having only featured once for the club, in the League Cup, since scoring for Ireland in Serbia but he is expected in along with the likes of John O’Shea, Harry Arter and Shane Duffy, all of whom played 90 minutes for their clubs.