James McCarthy out of Ireland squad 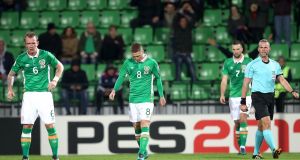 James McCarthy will not feature against Austria on Saturday. Photo: Ryan Byrne/Inpho

James McCarthy and Stephen Ward are both out of the Republic of Ireland squad for this Saturday’s World Cup qualifier in Vienna due to injuries but Martin O’Neill has clearly not given up yet on Sunderland’s John O’Shea who makes the somewhat slimmed down squad of 28 that is due to assemble in Dublin on Tuesday.

Ward, who picked up a hamstring problem while playing for Burnley the weekend before last, was always a big doubt. More attention will focus on the absence of McCarthy, the Everton midfielder who had become the subject of a minor war of words between O’Neill and his club manager Ronald Koeman.

The Dutchman had, for the second month in a row, stated that the midfielder was not fit and that he should stay at his club over the international break in order to concentrate on getting treatment for a hamstring problem that he linked with what was regarded at Goodison as a premature return to action with Ireland after a groin operation.

O’Neill had dismissed that idea as “nonsense,” and suggested as he named his original squad of 35 last week that the player still have a chance of featuring this weekend, remarking that he was getting better “day-by-day” but he has clearly had to admit defeat on that front.

It is not clear what further pressure might have been exerted on the midfielder, who turns 26 next week, or whether he suffered a setback that simply killed off any chance that he might be available for the qualifier but his position cannot have been helped by the team’s hefty defeat at Chelsea over the weekend.

Koeman is likely to want everybody available for the game against Swansea on Saturday week and it may have become too big a call to defy him at this particular time. McCarthy will also be aware that there may be more opportunities to play after Christmas when Idrissa Gueye is away at the African Cup of Nations as long, that is, as he does not irreparably damage his relationship with the coach now.

The fact that O’Shea’s can be included is something of a boost for O’Neill given the number of defenders he has lost for the game. If fit to actually play, the veteran Sunderland star’s versatility could be really important at a time that the manager is without left back Ward and desperately short of cover on the other side of his defence.

The most seriously injured of those to miss out is Derby right back Cyrus Christie who limped out of his side’s 3-2 defeat of Wolves on Saturday with a broken bone in his right foot.

The 24 year-old had sustained the injury during the game’s first half and received treatment on the pitch but he initially played on before being replaced early in the second period. Scans have revealed that the fractured a bone and he confirmed on Monday that he will be sidelined until well into the New Year.

“Gutted to be out for a minimum of three months,” the player said on social media. “Will see the surgeon to check there is no more damage and get a return date. Hopefully it’s a speedy recovery and the rehab goes smoothly and will be back fitter better and stronger.”

Also omitted at this stage are goalkeepers Ian Lawlor and Danny Rogers along with Reading’s Stephen Quinn who is also laid up with an injury, in his case a knee problem. Conor Hourihane is the seventh play to be cut on this occasion and so, in the absence of Shane Long and Daryl Murphy, who had both previously been ruled out by injury, the four strikers named in the provisional squad are all due in to train in advance of Thursday’s team flight.

Both of the Dundalk players named in the 35 have survived the initial cut despite some concern when it appeared neither had received any information in advance of the cup final with regard to what precisely they were to do. On Monday, the FAI tweeted a picture of training gear set out for the pair with their names and pictures in front of it and while it remains to be seen whether they make the actual match-day squad for the qualifying game, they are, at the very least, guaranteed a couple of days training at Abbotstown where O’Neill and his coaching staff will have the opportunity to gauge just how well they cope in amongst the rest of the international squad.