McGoldrick out and McCarthy a doubt for Wales match 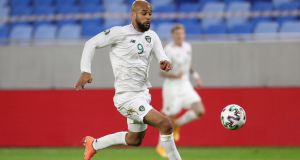 David McGoldrick is out of Ireland’s Nations League game against Wales with an abductor muscle injury while Crystal Palace midfielder James McCarthy is a doubt ahead of a match which the home side really must win if they are to have much chance of clawing their way back into contention in their four team group.

Stephen Kenny said that he would have to make a call on McCarthy before Sunday’s kick-off but that everyone else in the squad is fit and available. The Ireland manager says he has difficult calls to make on a few fronts given the quality of the general performance in Slovakia on Thursday night.

Aaron Connolly and Adam Idah are, of course, out of the squad and back with their clubs but Kenny declined to get into the finer details of the events that led to them being excluded from the play-off semi-final amid ongoing questions about some of the decision making involved.

It is suggested that when one staff member tested positive on Monday he was effectively replaced on the trip by somebody who he had been in contact with and that person was the one to then test positive in Bratislava.

Both Gary Owens on Friday and Kenny declined to provide specifics but it understood that Connolly and Idah then sat in the wrong seats on the plane, choosing to occupy empty ones immediately behind the staff member who would later test positive, and away from the rest of the squad. But it is not clear whether somebody told them they should move to their allocated seats or who should have.

“Aaron was selected in the team and Adam would have been a good attacking option for us as well, and to find out on the match day. Then it was a bit of a saga because the possibility existed of an appeal and so forth, so it wasn’t good preparation on the matchday because we were having discussions about it and the impact of it rather than the match itself.

“What happens in house should sort of stay in house,” the manager continued when pressed on what he feels should have been done differently and whether he had the opportunity to make his views on the matter known. “But certainly, realistically, it was a non essential football member, he wasn’t a football member in terms of a crisis situation that travelled and that’s, that’s something that we have to live with.”

Whether having Connolly, who had initially been selected to start, would have made the critical difference required, can never, as the manager acknowledged, be known but Kenny made it clear that the 20 year-old was one of those who he had started in both of last month’s games in part because he wanted him up to speed with the game plan before Slovakia.

“Yeah, we probably used the first two games to get some ideas across, it was off season, we needed to manage players; that goes without saying. And in terms of the game in Bratislava, to a point it worked because we had some games who knew exactly what was expected of them.

“Aaron Connolly had played in those two games with a view to him playing in a certain way, that didn’t materialise. But obviously we have lost the game on a penalty shoot out and now we have to dust ourselves down, get ourselves ready for the game against Wales on Sunday.