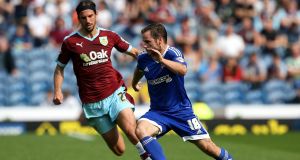 Alan Judge has been named the Sky Bet Championship player of the month for October while fellow Irish man Lee Carsley made it a double for Brentford by winning the manager prize.

Carsley, who last month was promoted from development squad manager for the remainder of the season following the departure of Marinus Dijkhuizen, won four of his five games in charge during October.

The 41-year-old began the month with a 2-0 defeat at Derby but then oversaw victories against Rotherham, Wolves, Charlton and west London rivals QPR, with the Bees keeping three successive clean sheets.

A significant factor in Brentford’s form was the performances of Judge, with the midfielder having a hand in seven of the eight goals scored by Carsley’s side in October.

Judge netted both goals in the 2-1 win against Rotherham and scored in the 3-0 success over Charlton, while setting up John Swift and Lasse Vibe at The Valley.

The 26-year-old Irishman also provided the assists for Marco Djuricin’s goal in the 2-0 win at Wolves and the Austrian’s strike that sealed a 1-0 victory against QPR — Brentford’s first win over the Hoops in 50 years.

Carsley said: “I am very proud of the players. This is really a team reward rather than a personal one.”

Of Judge’s award he added: “I am really pleased for Alan to get this recognition and reward for his hard work. It is something he deserves.”

Judge is a part of Martin O’Neill’s current Ireland squad, but has yet to win his first senior cap.

Meanwhile Ireland and Sunderland centre back John O’Shea will feature for the club in the Premier League this weekend - with his hamstring injury not as bad as first thought.

1 Stephen Kenny replaces Mick McCarthy as Ireland manager
2 Matt Williams: The economic earthquake for European rugby is coming
3 Simon Zebo: ‘It’s been tough not being able to put my hand up to play with Ireland’
4 Pat Critchley: ‘You teach or coach the person first and the subject or the game second’
5 Understated Stephen Kenny offers Ireland a ray of light
Real news has value SUBSCRIBE
Crossword Get access to over 6,000 interactive crosswords