Ireland-Everton feud does nothing for James McCarthy 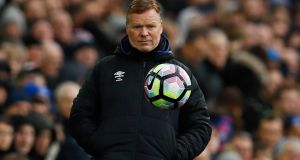 Everton manager Ronald Koeman claimed Martin O’Neill had ignored not only the advice of the club’s medical staff with regard to James McCarthy but also that the FAI’s. Photograph: Jason Cairnduff/Reuters

The already troubled relationship between Martin O’Neill and Ronald Koeman might take another turn for the worse around lunchtime on Friday when the Everton manager meets the press in order to preview this weekend’s Merseyside derby.

Koeman has already publicly criticised both O’Neill and his own player, James McCarthy, over the attempt made by O’Neill to start the midfielder in the World Cup qualifier against Wales last week, and, given his track record, the Dutchman is unlikely to let the matter lie when the media ask him about his list of absentees for the trip to Anfield.

FAI sources have vehemently denied the Everton manager’s claim, in an interview with the Daily Mirror, that O’Neill had ignored not only the advice of the club’s medical staff with regard to McCarthy but also the association’s, describing the allegation as “absolutely and utterly untrue”.

O’Neill arguably raised the stakes on Tuesday night when he contended that the player’s repeated hamstring problems had all been sustained at Everton and often while training. That said, the Ireland manager did seem to make a conciliatory move when he suggested he would ring Koeman to discuss Séamus Coleman’s injury.

The player will presumably be alarmed to be included so specifically in the latest round of criticism, with Koeman – when asked about the failed attempt to get McCarthy fit for Friday’s game – observing: “There are two people responsible for that. One is the player by himself. Finally, if he says: ‘yes, I’m fit,’ okay, but even the player needs protection from the manager and, once again, they didn’t give that protection to the player.”

Koeman’s humour is unlikely to have been improved by the loss for the rest of the season of Ramiro Funes Mori, who suffered a torn meniscus in Argentina’s game against Bolivia.

O’Neill, though, will surely have been irritated by the suggestion that he ignored the advice of his own medical staff and, after a recent attempt to extend an olive branch, the association might well regard the relationship as a lost cause if Koeman persists with the claim on Friday afternoon.

Meanwhile Wales defender Neil Taylor, whose reckless tackle broke Seamus Coleman’s leg at the Aviva Stadium last Friday, could have his automatic one-match ban increased to three after Fifa opened a disciplinary case against him.

As things stand, Taylor, like Gareth Bale, will miss the game against Serbia in June, but if he is found guilty by Fifa, as seems likely, he would also be ruled out of the games in September against Austria and Moldova.

Either way, he should be back in plenty of time for Ireland’s visit to Cardiff in October.

Graham Burke’s strike from halfway caps Shamrock Rovers’ fine night out 22:08
Lions squad set to have a greater spread than four years ago 22:00
Warren Gatland hopeful that Lions itinerary will be finalised this week 22:00
Blackmore back among the winners at Fairyhouse 22:00
Elite athletes still required to undergo 10-day mandatory quarantine 20:32