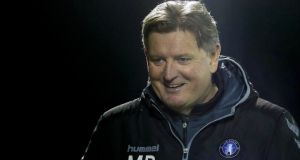 It’s derby day, sort of, in the Premier Division and league leaders Cork City head to Limerick who should provide another decent test for their Munster rivals whose 100 per cent start to the season hit a new high last weekend with the defeat of Dundalk.

Martin Russell’s side are back on track after a mixed few weeks but the manager appreciates that his players are going to have to show some improvement again if they are to become the first side this season to take even a point off the John Caulfield’s men.

“We had a few disappointing results there and so to beat Bray, who had been scoring for fun, was a good result for us but we know we will have to be better again to get something out of this one,” says Russell.

Freddy Hall, who was replaced in goal last week by Brendan Clarke, is an injury doubt for this one, but Russell has much the same line up of outfield players while City have Steven Beattie back, Greg Bolger still out and John Dunleavy likely to undergo a fitness test shortly before kick-off.

Dundalk are fixed rather less than that with Robbie Benson, Stephen O’Donnell and Stephen Kinsella all injured while Ciaran Kilduff serves a suspension but things will get trickier for Stephen Kenny if Pat McEleney and Paddy Barrett fail late tests ahead of the home game with Drogheda United.

Some of Pete Mahon’s players are, he says, still getting used to life in the top flight and one of the more experienced ones, Killian Brennan, is out injured. Richie Purdy is back from suspension, though, while Ryan Coulter is added to the squad.

The pre-season expectation might have been that Shamrock Rovers would also be right up there after six games but things have not gone to plan so far and Stephen Bradley is under no illusions about the fact that the team needs to start winning.

Remarkably, they are two points behind Finn Harps as the Donegal club goes to Tallaght on Friday. Paul Corry is out again for the Dublin side while Sean Heaney is suspended and Gary Shaw is a doubt due to an ankle problem. Ollie Horgan is without Damian McNulty while Paddy McCourt and Barry Molloy are both rated as doubtful.

Shane Keegan, like Bradley, acknowledges that his side could do with taking three points but if Galway are to beat Sligo Rovers they will have to do it without the suspended Alex Byrne or Maurice Nugent, Padraic Cunningham and Gavan Holohan, all of whom are injured. Kevin Devaney faces a late test on a foot injury too while Regan Donelon is Sligo’s only absentee.

Bohemians are again without Dinny Corcoran as they look to maintain their recent run against cross city rivals St Patrick’s Athletic. Ian Morris and Derek Pender (both Bohemians) and Darren Dennehy and Barry Murphy are all carrying knocks and will be assessed before kick-off.

Derry City, meanwhile, take to the field for the first time since the death of their captain, Ryan McBride. Ger Doherty takes the captain’s armband as Rory Patterson, Ben Doherty and Conor McDermott are expected back for the visit of Bray.

Munster beat Glasgow to keep their winning streak going 22:31
Solskjaer says United must be fully focused to avenge Istanbul defeat 22:30
Southampton and Wolves share the spoils at Molineux 22:20
How a visit from his barber helped Kyle Sinckler get back to his best 22:05
Mickey Harte is the new Louth football manager 21:59

1 Munster beat Glasgow to keep their winning streak going
2 The Offload: Ireland are stuck in no man’s land
3 Every kind of wind imaginable was against Tipperary football - and they came through
4 Nicky English: Galway and Waterford face battles with fatigue in All-Ireland semis
5 Ken Early: Roles have reversed for Guardiola and Mourinho
Real news has value SUBSCRIBE