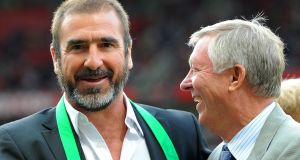 Alex Ferguson was willing and able to manage so-called problem player Eric Cantona for the betterment of Manchester United in the 1990s. Photograph: Getty Images.

Managers like José Mourinho, Arsène Wenger and Pep Guardiola attract global attention and remain pivotal figures at football clubs, but all are aware of the growing profile of their players and the problems it has the potential to cause them with “the dressing room”.

The balance might have shifted somewhat in the modern game but the manager is a still very powerful figure. He is the gatekeeper who controls access to desired goals: for young payers, the offer of a full-time professional contract; for older players, the offer of a new contract at the expiry of their existing contract; and for both, team selection.

However, professional football management, particularly at the highest levels, is a results based business where chronic insecurity, vulnerability, rejection and a fear of failure are prominent features of everyday life.

Managers are faced with a working environment epitomised by interference from agents, owners and directors and are viewed as marketable assets and commodities that are bought, sold and discarded once their managerial value dissipates.

Professional football managers are also the subject of considerable scrutiny from stakeholders such as media and fans when it comes to issues like team selection, style of play and player recruitment.

In this regard, one key managerial role involves the assessment and recruitment of current and prospective players. While no unique characteristics can be isolated, factors such as a players’ willingness to learn, mental strength, resilience, professional attitude, dedication, off-field behaviour and work ethic influence this recruitment and assessment process.

Considerable significance is also placed on a player’s ability to cope with the physical demands of the game, the socio-cultural problems of adjustment, the quality and provision of coaching and, importantly, an openness to learning from staff and senior players.

Professional football is a unique industry in which the observation of a player’s performance is unusually transparent. There are a wide range of statistics on players’ strengths and weaknesses which may complement intuitive judgements and assist managers in confirming their initial perception of a player.

However, some considerably important aspects of non-playing performance are more difficult to measure. For example, some football players may develop reputations or stereotypes concerning their possession of an unprofessional attitude resulting in them being labelled as being “a bad influence” and/or “disruptive”.

This places considerable pressure on the manager’s authority and raises questions about the ability of a manager to maintain control over players in general and problem players in particular.

Recently, Gareth Southgate stated: “Speaking to other managers, the same themes crop up: young players who earn too much too soon; players who care less about improving their game and more about becoming celebrities; players who talk about cars and girls rather than the game”.

Some managers may relegate certain players to “bomb squads” or force them to train separately or with the youth team. Other managers may adopt more subtle styles of management.

A manager’s willingness to put up with a so-called “problem player” and decision to select them may be, in part, a reflection of the obvious pressure for immediate results. It may also be that some feel that their style of management can positively influence the behaviour of so-called problem players.

For example, the ability of both Harry Redknapp and Alex Ferguson to manage and control allegedly “problem” or “difficult to manage” players such as Paulo di Canio and Eric Cantona is well documented.

More recently, Chelsea manager Antonio Conte’s ability to manage critical conflict incidents within the squad is a reflection of his managerial acumen. The potential for those incidents to have impacted on Chelsea’s squad cohesion and title aspirations was significant.

When recruiting players, therefore, managers need to be cognizant of the importance of both natural and contextual talent. The former relates to talent that is owned by the player while the latter concerns how a player fits in with the team ethos, culture and style of play.

Contextual talent is important as some players who “fit” a particular team’s style or culture will perform up to, and even in excess of, what their intrinsic talent would suggest is possible. Others, who do not fit, will generate negative contextual talent and fail to reach expected levels of performance.

Most managers are aware of the importance of maintaining equity within the team in terms of wages, bonuses and, in particular, the treatment of players. Open channels of communication, squad rotation, the clarification of playing roles and behavioural expectations may assist in alleviating perceived inequity and facilitate team cohesion.

Managers, though, also need to understand the culture of professional football and, in particular, the dressing-room environment.

The professional game is characterised by a ruthless, macho culture where heightened levels of performance expectation exist alongside a reduced tolerance for failure. Managers need to be conscious of the way in which ruthless competition for places and hugely individualistic work-place attitudes can generate major insecurities.

The manager’s task is to somehow take the members of this most individualistic of environments and, at least once a week, produce from them a coherent unit. The challenge should not be underestimated.

Within this environment, camaraderie exists alongside conflict, enlightened with utterly outdated thinking, while the physically and mentally strong sit beside the insecure and weak.

In this context, dressing room displays of cockiness, arrogance and camaraderie quite often mask the feelings of vulnerability, competitiveness and uncertainty that pervade the players’ profession.

The best managers understand it all. They are aware that, for players, any threats to their status amongst their peers and significant others, as well as the potential loss of a prospective professional contract, due to injury or loss of form, consumes their lives.

The ability to contain, channel and even capitalise on these feelings, as Ferguson did so effectively in his never-ending campaign to “control” his dressing room, is often what distinguishes the ordinary coaches and managers from the superior ones.

Elite managers like him understand how emotional intelligence assists in understanding manager-player relationships and how it helps them to prevent conflicts arising.

As the case of Claudio Ranieri and Leicester City shows, however, it is an environment where the balance of power can very quickly shift in the modern-day game.

Dr Seamus Kelly is a former professional footballer, who played in goal for UCD, Cardiff City and Bohemians amongst others. He is now a lecturer at and the director of the UCD centre for Sports Studies. His book, The Role Of The Professional Football Manager has recently been published by Routledge.