In 1936 with the Nazi Party in power, the German team was welcomed to Dublin 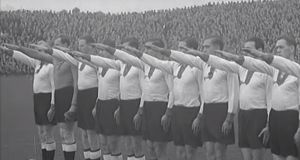 The German team line up and raise their right hands during the national anthems ahead of the 5-2 loss to Ireland in Dalymount Park in 1936. Photo: Pathé News screenshot

It had been three years since Adolf Hitler had risen to power as chancellor of Germany when the country’s national football team touched down in Baldonnel Aerodrome with swastikas printed on the tail-fin of their plane and a welcome party from the Irish Free State Football Association awaiting them along with president Eamon De Valera and the lord mayor of Dublin Alfie Byrne.

The day was Friday October 16th, 1936 and the German side were set to take on the Irish Free State in a much-anticipated clash at Dalymount Park the following day. After their arrival from Glasgow – where they had played Scotland a few days previous – The Irish Times reported that the German team and officials were taken by bus, adorned with swastika flags, to the Gresham Hotel in the city centre.

Much had already happened in 1936. On March 7th, Germany had violated the Treaty of Versailles by re-occupying the Rhineland. Hitler and the Nazi Party were at their most popular having rebuilt the economy out of the ruins in which it lay following the first World War. The rest of Europe was still struggling economically while Germany flourished. The 1936 Berlin Olympics had largely been a success, although the four gold medals won by African-American Jesse Owens did go against the ruling party’s desire to show that the Aryan race was superior to all others. Meanwhile, on the outskirts of Berlin, Sachsenhausen Concentration Camp – in which an estimated 30,000 people died over the next nine years – had just opened.

Within six years Auschwitz would come into existence and the Nazi’s Final Solution plan would begin in earnest. But on that October weekend in Dublin it was football and the building of international relations that was on the minds of the two teams and their various dignitaries.

Ireland had played Germany once before, in 1935, and lost by a scoreline of 3-1 in Dortmund but they quite fancied their chances in this home fixture. While the Nazis did see football as an important way of showing strength on a world stage, the game was still yet to be professionalised in Germany while there wasn’t even a national league yet in place. Instead, teams competed in 16 regional leagues known as Gauliga – across the country. Since 1933 all Jewish clubs and players had been banned from competition and Germany struggled in the 1936 Olympics, eventually losing out to Norway in front of Joseph Göbbels and Hitler himself.

Now, just days after losing to Scotland at Ibrox, they faced Ireland at a packed Dalymount Park. Having made the short trip up from O’Connell Street to Phibsborough on that Saturday afternoon, the Germans completed their warm-up and then lined up for the national anthems and, indeed, for what would be the lasting image of the match.

So reads The Irish Times report from the day: “Extraordinary scenes preceded the start and marked the close of an eventful struggle. The German team lined up in the centre of the field and faced the ‘popular stand’. They gave the Nazi salute and, turning to the grandstand, in which were the officials of the German Association and the four hundred Germans who had come by the specially chartered liner, stood rigidly to attention with right arms outstretched, while the Army Band under the leadership of Colonel Fritz Brase, played the Nazi anthem which was sung by the Germans on the stand.”

Straight arm salutes were compulsory for the German team at the time so it was not unusual, but it is nonetheless striking to look back on such a show of support for fascism in Dalymount Park, with the swastika-adorned Nazi flag fluttering alongside the tricolour. While news of the darker side of Germany’s fascist government was already floating around international media it was still only early days in the regime and many weren’t sure what to believe.

Indeed, three years later the Irish players themselves would have to raise their right arms in solidarity with the Germans when they played a return fixture at the Weser Stadium in Bremen. Outspoken socialist, former interned Republican and Irish captain on that day, Jimmy Dunne, is said to have shouted down the line: “Remember Aughrim, Remember 1916!” as they raised their arm. Also awkwardly raising his arm on that team was Dubliner and Manchester United captain Johnny Carey who, as fate would have it, later joined the British Army to fight against the very forces he was saluting.

Three years earlier, on that October Saturday afternoon in Dalymount Park, there was even less known about what was to come under Hitler’s dictatorship. While the sight of the German team with their right arms raised has become the lasting image from that game, it should also be remembered that this was an Irish performance for the ages and one that, according to The Irish Times, “put Ireland on the football map on the Continent – and much nearer home.”

The report from Dalymount continued: “In my close on forty years experience of Association football I have not seen any Irish team play with greater verve, dash and persistency than were now displayed by our players.”

A dominant performance from Ireland saw them run out handy 5-2 winners with Oldham’s Tom Davis scoring a brace on his debut. Such was the jubilation of the Irish supporters that they stormed the pitch at the end of the game and, according to The Irish Times, “took up position in front of the grandstand , and lustily cheered the visitors, hundreds of arms being raised to the Nazi salute.”

It was one thing for the German team to make Nazi salutes during their national anthem but hundreds of members of the Irish public raising their right arms on the pitch at Dalymount Park shows, perhaps, just how little was known about what was going on in Germany at the time. One of the German dignitaries would later call the show of solidarity from the Irish fans “a magnificent gesture of real sportsmanship”.

There is little doubt the fact that the German team in their swastika-adorned kits were treated well in Dublin with minister for finance Seán MacEntee, the lord Mayor of Dublin and former Irish Volunteer and IRA member Oscar Traynor – at that stage a TD – attending a gala dinner for the team and its dignitaries at the Gresham Hotel after the match.

But while much has changed both on and off the pitch for Ireland and Germany since that Dalymount Park game, one thing has certainly stayed the same - notably the difficulty English reporters have in pronouncing Irish names. Some days after the match, An Irishman’s Diary in The Irish Times wrote: “I wonder if any of my readers got the laugh I did last Saturday night during the broadcast of the sports bulletin on the national programme from London.

“We had just been informed that Ireland had beaten Germany in the international association football match in Dublin. Then the announcer told us that ‘Don-nelly’ had scored Ireland’s first goal, later referring to ‘Go-hagan’s’ score.

“Did the Donnellys and the Geoghegans shudder? At a guess I would say they did but, apart from that, does such pronunciation indicate that Irishmen do not figure on the BBC pay rolls?”

Three years later Ireland would line up for that ill-fated return game in Bremen – the last international played by Ireland before the war. The next time the teams would meet it was back at Dalymount Park again in 1951. The result was the same as Ireland won 3-2 but, otherwise, everything had changed.

Solskjaer unable to say if Paul Pogba will play for Manchester United again 22:30
Moloney on song as Tipperary prove too strong for Westmeath 20:45
TV View: No Beano on the couch as Dennis proves a right old menace 19:06
Newcastle feel the heat as Arsenal get some of their old mojo back 19:18
Clare pull well clear of Laois to keep unbeaten run intact 17:51

1 On healing and wild hurling: The re-education of Diarmuid Lyng
2 Few, if any, have given as much to Munster as Garrett Fitzgerald
3 Solskjaer unable to say if Paul Pogba will play for Manchester United again
4 ‘Your father works for my father’: Schools rugby turning toxic in the stands
5 Wexford best the weather and Kilkenny on a mad day to be hurling
Real news has value SUBSCRIBE
Crossword Get access to over 6,000 interactive crosswords