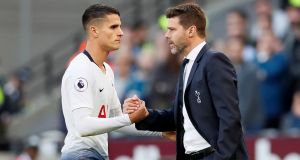 Tottenham’s narrow victory against West Ham at a noisy London Stadium was a difficult one to get the head round. On the one hand it was almost unwatchable. The game got persistently bogged down, attacking moves dribbling away to nothing. On the other the match had a constant intensity and there was a tense tactical battle at work. The way Spurs came out on top, Mauricio Pochettino hopes, might prove telling.

Throughout all the off-field challenges that have been thrown his way over the past few months (the stadium, the transfer drought) Tottenham’s manager has maintained a phlegmatic aspect. He has countered negatives with positives, insisting things might not be as bad as they seem. He has the best squad he could afford, he will say. Continuity can reinforce unity, he will go on. It shows every player still at the club has a role to play.

Now fourth in the table, Spurs are enjoying their best start to a Premier League season. In that time there have been two proper defeats and a lot of three points earned the hard way. The win on Saturday was one of these. It was built on character, Spurs digging in from start to finish, doing just enough even in the rare moments when West Ham played sharply enough to open them up.

But it was also decided, quite literally, by two players not always in the first team picture. Érik Lamela’s winning header, flicked low across goal and inside the far post, was set up by Moussa Sissoko’s left-footed cross.

Sissoko preceded his assist with a fine bit of wing play, sending the befuddled Felipe Anderson first one way, then the other. He had other silky moments in the match too but he excelled in his defensive duties. The midfielder filled holes across the park and frequently doubled up with Kieran Trippier to frustrate Anderson, West Ham’s £35 million flair player, all the more.

That Sissoko has struggled to make an impact at Tottenham is apparent to everyone, including himself. But, with some fans describing this performance as the best since he joined the club, the French man has not given up the ghost. “Football is up and down. You have to try to keep the balance,” he said. “Even the best player in the world can have a bad moment but I try to stay positive in my mind and I know all the players and the staff are always behind me.

“I’m very happy when I give an assist. I’m a midfielder so my job is to help the team and then, when I can try, to give an assist and it was a good one from me today. I will try to keep going on that way. We have a lot of players in this squad but we all rotate and when you have the opportunity to play you have to take your chance. Today was a good afternoon for me.”

For Pochettino the focus now shifts to Wednesday night and PSV Eindhoven in the Champions League. It is an away fixture they have to win to have any real chance of qualification. To win, he says, his squad must prove they are developing in the way he believes they are.

“It’s a must-win game and we know very well that to win we need to repeat the type of performance we had today,” the Argentinian said. “When you have a game that you must win you have to manage the stress. That is part of the growth, of growing up, for the team to get more mature. If we are not capable of winning this type of game, we cannot win the title.”