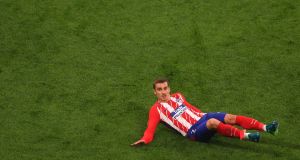 Antoine Griezmann will lead the line for France in Russia. Photograph: Catherine Ivill/Getty

France boast a squad which can only be described as magnifique – the acid test for Didier Deschamps this summer is to get his mercurial, exhilarating parts working as one smooth machine. Les Bleus are blessed with world-class players in pretty much every position – granted, the full backs are a potential weakness – but this side are yet to really click together in the manner which would make them champions-elect in Russia. Even on their run to the Euro 2016 final – when Germany were the only heavyweight side beaten before extra-time heartbreak against Portugal – the French seemed strangely constricted, unable to fully let the shackles off.

But if they can gel France are a major contender to win their second World Cup. The forward line is young and thrilling with figurehead Antoine Griezmann supported by a cast of stars including Kylian Mbappe and Ousmane Dembélé. Such is the quality of the firepower at Deschamps's disposal, he was able to leave Anthony Martial, Kingsley Coman, Karim Benzema and Alexandre Lacazette at home. The midfield options are strong, with N’Golo Kante, Paul Pogba and Blaise Matuidi – while Laurent Koscielny’s injury may prove a blessing in disguise, allowing Barcelona’s Samuel Umtiti to partner Raphaël Varane in defence. As ever with France though, the margins between the sublime and the ridiculous are incredibly thin. It could quite easily blow up in their faces in Russia – but if they get it right, they could conquer the world.

What else could it be? France’s sole World Cup win came on home soil in 1998, the brilliant Les Bleus beating defending champions Brazil in the final to unite a nation.

France topped their group which included Sweden and the Netherlands, although it wasn’t completely plain sailing. They drew 0-0 away with Belarus and at home to Luxembourg, and were beaten 2-1 away to runners-up Sweden. Ultimately though, their passage to Russia was comfortable.

The captain of the France side which won the World Cup in 1998 and the European Championships in 2000, Didier Deschamps took over in 2012 and recently signed a new deal until 2020. He guided Les Bleus to the quarter-finals of the 2014 World Cup, and the final of Euro 2016. This summer he needs to get his side playing with a joie de vivre – reigniting France’s love-affair with their national side.

Antoine Griezmann remains the focal point of the French attack. He inspired Atlético Madrid to this season’s Europa League, and at 27, this summer will see him at his peak.

The heir to Thierry Henry’s throne, Kylian Mbappe burst thrillingly onto the scene in 2016-17 as he inspired AS Monaco to the Champions League semi-finals. A quicksilver forward and a brilliant finisher, it is hard to fathom he is still only 19.

France should top their group containing Denmark, Australia and Peru – before a probable last-16 clash against Croatia. They could then have the chance to exact revenge on Portugal in the quarter-finals. If they win that, they can go all the way.

1 Gordon D’Arcy: Change was advisable before Twickenham; now it is inescapable
2 Cheltenham keeping a watching brief on coronavirus
3 Seán Moran: Dublin and Galway make good starts in differing circumstances
4 Gerry Thornley: Wild reactions to this Ireland team as fickle as the wind
5 Munster were fever-tested when they arrived in Italy
Real news has value SUBSCRIBE
Crossword Get access to over 6,000 interactive crosswords