Shortened 10-team League of Ireland so far a success

Title race, battle for a European spot and to avoid relegation play-off are all pretty lively 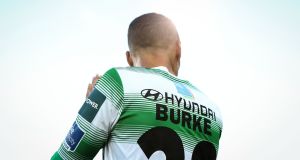 Shamrock Rovers’ Graham Burke has received an Irish call-up in recognition of his form and goals. Photograph: Oisin Keniry/Inpho

You can point to the slightly crazy fixture list and exclusion of clubs who would still feel they had something to contribute but with everyone who is still there having now played half of their games, the 10-team league does seem to have achieved a concentration of quality and, as anticipated, given everyone something to play for.

Bray need to start delivering a bit more regularly if things are to stay that way but the title race as well as the battles to a get a European spot and avoid the relegation play-off look pretty lively as things stand.

Taking just two points from four games has probably fatally undermined Waterford’s chances of maintaining their early season challenge to the top two but it says something about Shamrock Rovers’ ongoing inability to click in a sustained way that Alan Reynolds’ side still goes into Friday’s game at home to Derry with a seven point advantage over the Dubliners.

If their sudden slump turned into something more sustained then that would be eaten up quickly enough although there are two other teams in between and as things stand the newcomers retain quite a cushion over a side that still struggles to string a couple of good performances together back to back.

Stephen Bradley put the scale of Tuesday’s win over St Patrick’s Athletic down to his side taking the chances they created for a change and even with the figures skewed somewhat by the 12 goals scored in the home wins over Bray then Derry back in February and early march, their overall return is fractionally down on last season when it was already clearly an issue.

They are, to be fair, significantly better at the back despite the very public debate about their goalkeeping situation but that has not been enough to make any impact on their bewilderingly awful away form.

Over the course of last season, Rovers won seven and lost nine of their away games giving them an average of just over 1.3 points per game. Dundalk, by comparison, managed 2.0 and the difference between the two figures accounted for the bulk of the gap between the two sides at the end of the season.

At the pretty much the midway point in this campaign, they have just one win from nine games on the road and the average points return has, almost incredibly, slumped to 0.55. That form is not only undermining any chance they might have had of being contenders this time around, it is threatening to cost them a place in Europe next season, a key stated target for the club despite the ongoing distraction, hugely admirable as it is, of the “project”.

When Rovers are good they can be genuinely very impressive. A change of line up and tactics at the Brandywell a month ago produced a strong performance (though only one point) and a few days later an unchanged side completely imposed itself on Cork who were well beaten in Tallaght.

Despite having a decent looking squad, though, Bradley seems unable to coax any real level of consistency out of his side, however, and having looked as though they just might have cracked it that night against John Caulfield’s side, they took just two points from the three games that followed.

For this most recent game there were, for various reasons, four changes to the side that had beaten Cork, and they were back to playing 4-2-3-1. They won with strong performances from a number of players who will be key if there is to be a sustained improvement and it might well, finally, be the start of something but who would bet on it at this stage.

And so Friday’s visit to Dalymount Park looks more daunting than it should really. Whatever about the scale of the gap to the top two above them last season, the more intriguing issue was that Rovers looked as though, given the players they had, they should have finished more than three and seven points ahead of Derry and Bohemians respectively.

On paper, at least, they look like they should be better this season and yet they head into the game trailing Kenny Shiels’s side by four points having played a game more. The midweek win has put them fairly comfortably clear of their cross-city rivals for the moment but their recent record in these derby games makes for pretty grim reading.

Graham Burke’s form (especially his goals without which the team would be in far greater trouble) and Irish call up, the better of the close season signings, most notably Sean Kavanagh as well as the early emergence of some promising young players, most obviously Aaron Bolger, are among the positives for a club whose long-term strategy has the potential, at least, to be transformational.

If the core supporters and their board really have the patience for all the underage activity to start bearing significant fruit then they are to be admired for that too but given record over recent years it is hard to dispel the sense that Rovers are a fair way off where they need to be for the current manager to be entirely secure. The rumblings seemed to be starting in some quarters before the Cork City win.

He might not like the speculation and that’s entirely understandable but Friday is the latest in a run of big nights for Bradley. Another loss to Bohemians is bound to have him on the back-foot again.

1 Gerry Thornley: Wild reactions to this Ireland team as fickle as the wind
2 Dan Tuohy explains ‘rotten to the core’ comments
3 Cian Healy out of remainder of Six Nations
4 Cheltenham keeping a watching brief on coronavirus
5 R&A call for ‘common ground’ on golf’s distance debate
Real news has value SUBSCRIBE
Crossword Get access to over 6,000 interactive crosswords