Antonio Conte issues warning to Chelsea ahead of likely exit 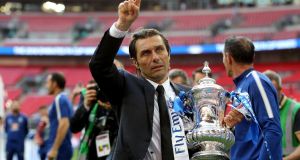 By the time talk turned to Antonio Conte’s future on Saturday night, the Italian’s hair was lank with champagne, silverware was acting as a shield and the mood was one of defiance. Not that Chelsea’s head coach has ever been particularly reticent when challenging his employers in public.

“For sure, when you decide to take a coach like me, you must know who you are taking on, who you are charging for this job,” he said. “I cannot change my personality.”

It was always likely to end this way, with Conte’s belligerent management style and Chelsea’s pursuit of something close to self-sufficiency having placed them on a collision course from the off. His two-year tenure has yielded a Premier League title and now an FA Cup and should he depart, as is anticipated, with 12 months still to run on his contract then he leaves with his stock high. His techniques have secured trophies even if, just as at Juventus, those in authority have tired of the grumbling and sniping en route. They, too, were never likely to change their own tack.

Conte is actually due back in Italy today to attend Andrea Pirlo’s testimonial at the San Siro, but he has left Chelsea with a warning to digest. He acknowledged his team had blunted, frustrated and defeated Manchester United with an ugly if admirably effective performance, a few key dashes of brilliance from Eden Hazard aside. Their victory had been forged upon the defensive displays of an excellent back three, Thibaut Courtois’ reflex saves and N’Golo Kanté’s energy in midfield once an early lead had been established. Roman Abramovich, as is widely accepted, would prefer a more expansive brand of football, more akin to Manchester City’s.

Yet, in aspiring to achieve that, Conte fell back on his customary gripe. Emulating Pep Guardiola and co will take lavish investment. “If you ask me if we can play better then, yes, we can play better, but after this game,” he said. “For now the real situation of this club is this: we have to play strong defensively if we want to win a trophy or get a place in the Champions League. Maybe we missed the Champions League this season because we tried to play very open and, in this moment, we can’t do this, especially against a strong team.

“[Playing like this] was the only way to lift a trophy. If you want to change then we can change our idea, but you must change many players. Understand? Last season, after we won the Premier League, we spoke with the club and tried to find the right way to defend our title. But, as you know, it’s not simple and sometimes you can have not always the same ambition. This season, with my staff, I have worked more than last season to overcome the difficulties. The mountain we had to climb was very high, very high, very high . . . but, despite this, we lifted an important trophy.”

He paid tribute to the commitment of his players, even if relations with some have been strained at times. Plenty have tired of the negativity, and some of his public grumblings about recruitment policy have been construed as criticisms of those added to the ranks. Others on the staff have merely been infuriated by non-involvement.

Willian was the first Chelsea player to scuttle away from Wembley on Saturday, long before his team-mates. He then chose to post a photograph of the post-match celebrations on the turf on Instagram having blocked out the head coach with three trophy emojis. Though he later deleted the post, that felt a rather needless elbow in the ribs from a player whose days at Stamford Bridge may be numbered regardless of the identity of the head coach.

As the players have suggested, resolution is needed one way or the other on the managerial situation. This club cannot go into another campaign with so many cogs grinding against each other in the machine. Conte expects “a private conversation”, presumably with Marina Granovskaia, upon his return from Milan, where compensation is likely to be the main topic up for discussion, rather than planning for next term.

He had shared a businesslike handshake and brief nod of the head with the influential director as he shuffled along the line of dignitaries just prior to the ticker-tape, fireworks and collective hoisting of another major trophy.

“The club has the right experience to understand what they have to do in the future to be competitive, and to fight for a place in the Champions League,” he added. “And not just to win, but to win well.”

He knows what he would want to stay, but it is at odds with what the board are currently able to deliver. – Guardian Service