Zabaleta: West Ham should go all out to secure Declan Rice

Teenage Republic of Ireland player said to have turned down deal worth £15,000 a week 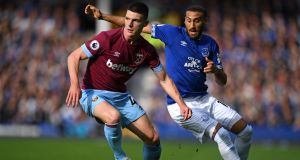 Rice has operated in defensive midfield over recent weeks, and contributed heavily to the win at Everton and encouraging draw at home against Chelsea on Sunday which have lifted West Ham from the foot of the league table. Manuel Pellegrini heaped praise on the youngster’s performance in that derby, yet Rice has entered the final 12 months of his deal having rejected a new offer over the summer.

The 19-year-old is understood to have turned down a deal worth around £15,000 a week, and is holding out for around twice that, with the club apparently wary of harming his progress by granting a player who made 26 top-flight appearances last season too much too young.

“He is young and still has room for improvement for sure,” said Zabaleta who, at 33, has played his own part in the side’s recovery. “But he has the right ability and attitude to become one of the greatest players for West Ham.

“He is in the last year of his contract so West Ham need to think about his situation because, even though he is young, he looks so mature and is proving he can perform for the team. He is one of those young players you like to look after and help with all the information you can give him.”

Rice, who started at Chelsea’s academy before moving across the capital at 14, is unperturbed at the lack of progress in talks. His negotiating position becomes stronger with each performance, with England attempting to prise his allegiance away from the Republic of Ireland, for whom he has been capped three times in friendlies.

Zabaleta said: “Let’s not put more pressure on him, and instead see how far he can go as a player . . . He has a lot more to learn but all the players in the dressing room need to look after him and keep his feet on the ground. Even at the age of 19, if you play two or three good games in this league you attract attention from everyone.”