Germany and Joachim Löw exit under dark cloud of uncertainty

Emmet Malone at the Kazan Arena 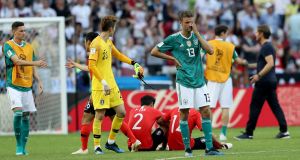 As Germany left the stadium for their flight back to Moscow, there was no mistaking just how starkly their status had changed. Defeat by South Korea meant elimination from the World Cup but beyond that the aura that comes with success had been stripped suddenly and ruthlessly away. The sense was of utter dejection as the players slipped quietly through the mixed zone and towards the waiting bus.

A few metres away, reporters waited just three questions before asking the man who had managed so many of those same players to the title four years ago whether he was the one to take the team forward. It was premature to make a call on that, Joachim Löw replied, but they would talk about everything “calmly in the days ahead.”

The postmortem will already be well advanced by the time Thursday’s flight home to Frankfurt touches down but it might be a little longer before we discover whether Löw pays the price for a starling failure that, he readily admitted, had left left him reeling.

Remarkably, the Germans are the fourth champions in five World Cups to crash out at this stage of the competition. This was very new territory for them, though; this was modern football history in the making and it showed.

“Finishing last in our qualifying group is not what we expect of ourselves as a nation,” acknowledged Mats Hummels as he fielded requests for an explanation of what had just happened while clearly still struggling to understand it himself.

Löw said he was at a loss too. The team had not deserved to progress, he observed, much less retain their title, but he could not explain quite how they had collectively come up so terribly short. “It was not just Mesut Özil,” he said when specifically about the Arsenal midfielder’s performance.

“There were a number of players on the pitch who weren’t producing the sort of display that you would expect. I take responsibility for what has happened, of course, but I look at it now and I still think that it was a good line up.”

On paper, it certainly should have been good enough to send South Korea home pointless but the attacking side of things never clicked for the Germans against opponents who worked hard from the outset, defended in numbers throughout and ultimately capitalised on the champions’ growing need to get forward and grab a goal.

“I feel great but at the same time a little empty and ambivalent,” said their coach, Shin Tae-young. “I told my players that Germany needed the victory more than we did and so there would be chances; that they have to be ready. It is good that they took them, that we have beaten the team rated number one in the world but we are not going to the round of 16 either.”

Had they played like this in their earlier games, perhaps they might be. For all of Germany’s possession, one of the South Korean strikers, Tottenham’s Son Heung-min, had more attempts on goal than any other player on the pitch, while the other, Koo Ja-cheol, made more tackles and that was despite having departed after just 57 minutes.

Still, the Germans had chances to score the goals required to save themselves but there was only the miss by Hummels a minute or two before the first goal that might be described as a squandered opportunity; that’s the way he saw it, at least.

“Sometimes it catches the opposition by surprise when a player they don’t expect appears in the area,” he said of his arrival into area during a passage of open play, “and that was the problem, it worked, but I didn’t score. I put a lot of effort on the training ground into headers in situations exactly like that but today when it mattered, I missed.”

By then, though, the very urgency that prompted his appearance in South Korea’s area was allowing the Asians a growing number of opportunities to catch the champions on the break. Both Son and Moon Seon-min threatened to score against the run of play after Löw had taken off one of his two holding midfielders, Sami Khedira, in order to add another striker.

Mario Gomez, as it turned out, added little positive to the equation but Khedira was missed and the imbalance became much more pronounced when left back Jonas Hector was replaced by Julian Brandt. The Koreans, it turned out, were ready and waiting.

Son narrowly missed the target from the edge of the area at the end of one break and as the Germans tried to recover their composure following another, Toni Kroos, actually one of his team’s more effective players through the more mundane part of the match, threw away possession again by thumping the ball into an opponent.

From the corner that followed, nearly three minutes into stoppage time, the midfielder turned the ball back towards his own goal and Kim Young-gwon seized upon the gift from a couple of yards. It took VAR to overrule the initial offside decision but once the goal was awarded the game was up for the 2014 champions. Manuel Neuer joined in their desperate last gasp attack but when Ju Se-jong stepped around him deep inside the South Korean half and launched the ball long, Son had only to tap home the goal he deserved for the wider day’s work.

“In the end we took off the defender and we lost some of our structure,” acknowledged Löw, “but we had to take those risks. In the end, I am shocked that we have not beaten the Koreans but I cannot fault the players for their effort even if we did not play our best.

“Our games before we came here were not so good but we believed that once the tournament began we felt that things would work out well. As it is, we have to accept the situation as it is which is difficult. We are out and disappointed.”