Gaffe-free manager’s message is simple: England will go out to beat Belgium 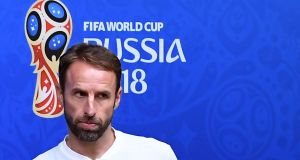 Gareth Southgate strode into England’s press conference in Kaliningrad during the very minutes South Korea were compounding Germany’s World Cup bewilderment with two late goals. It felt like a moment of acute reversal of fortune between the nations. Germany, so often the cause of England’s torment at major tournaments, had exited after a woeful series of misadventures and a complete desertion of form. England, meantime, arrived in sunny Kaliningrad already qualified for the second round and with Harry Kane in contention for the Golden Boot. For both countries, the shoe was on the other foot.

“Of course I am surprised,” Southgate said carefully when asked about Germany’s implosion. “I was here last summer for the Confederations Cup, and they brought a young team. But in this tournament I think they have been ahead for about a minute and a half of their three matches. It has been unusual to see them struggle as much as they have. But they have played teams that have been tactically very good against them and were exposed in counterattacking situations in particular. So I didn’t look at that group and think automatically they would go through.”

The response was classic Southgate: measured and articulate and, in the crowded room, achieving the effect of a bomb safely defused. England seem to have stumbled on a manager who is gaffe-free and transcends the tendency to mock and ridicule. Southgate, remember, was one of the English men who directly felt the sting of Germany’s peerless self-belief, missing a penalty in the Euro ’96 semi-final, in the summer of Rule Britannia and Three Lions, when football came home. It ended with Andreas Muller’s mock-strut and the usual tears. But there would be no gloating at Germany’s misfortune here.

“I don’t think it has any bearing on us. I think what it shows – Italy out, Holland out before we got to this point, Chile, now Germany – there is no opportunity to rest on where you are as a team or stop the constant improvement. We have learned a lot from watching Germany last summer that we implemented, and their team that won the World Cup, we studied very intently. So indirectly they have had a very big bearing on what we are doing now. But in sport and in life, you have to keep evolving and improving, and it just shows that anybody is vulnerable on a given day.”

Maybe buried deep in those words lay a little of the barbed intent with which Southgate has made this accidental opportunity his own. It was almost a rite of passage that England’s tournament arrangements be shambolic: a carnival of unhappiness and boredom. That hasn’t happened this time. Southgate deftly batted aside a question about the well wishes he had received from David Beckham and just laughed when asked about his concerns over the team hotel, which is close to the main thoroughfare in Kaliningrad.

“Well, we’ve not been there yet! That seems to be the story written about every hotel ... There is always something nearby to distract us. But we seem to manage okay.”

It was another headline dissolved. Beyond confirming that Eric Dier will start against Belgium, Southgate didn’t elaborate on his personnel and predicted that Belgium would stick with same system. But the only real tension within Thursday’s game against Belgium is whether England can finish first, and whether that would give them an easier path through to the final. It was the one subject on which Southgate became scornful.

“We think we want to keep on winning football games and develop a winning mentality. We’ve not won a knock-out game since 2006. Why we would want to plot a venue for our semi-final is beyond me, really. So best we focus on tomorrow. We have no idea who, when or where we will play in the next round.”

By late afternoon, one or two England flags had been hoisted on to the decking of the local restaurants, but one of the ironies of the team’s ultra-smooth start to the tournament is that no England team has ever been as thinly supported. All the scare stories about Russia hit home.Those who did arrive here were low-key, discreet, strolling the city. There was none of the blatant nationalism of old; the beery anthems, the sense of a city being “taken”, the mock chainmail outfits. It was as though even England’s fans had taken their cue from Southgate’s studiously understated approach. His message was simple: England will go out to beat Belgium.

“If I go and headbutt Roberto [Martinez] in the last five minutes you’ll know that maybe we have taken a different approach to getting through,” Southgate joked when asked about yellow cards and fair play.

“Part of the discipline of a tournament is trying to minimise yellow cards. We want to top the group, and that would mean winning the game. I go back to the fact that we want to develop a winning team. I can’t imagine a situation where I would stand in front of the players and talk to them about anything else. It wouldn’t be authentic.”

They may not win the World Cup but one thing is certain: Germany won’t beat them. Nobody said so, but for England, that felt like a small victory.

Rugby Stats: Van der Flier’s versatility keeps him out ahead of his rivals 06:00
Double-headers and late evening throw-ins off the cards for this year’s Allianz Leagues 06:00
Fiona Coghlan says quarantine ‘would be incredibly tough’ on Ireland 06:00
Gerry Thornley: Simon Zebo’s return looks like good business all round 06:00
Shiels left to pinch himself as Northern Ireland complete remarkable feat 01:00

2 Rugby Stats: Van der Flier’s versatility keeps him out ahead of his rivals