Germany aiming to be ‘masters of their destiny’ again 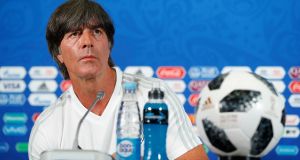 Joachim Löw: under his stewardship Germany have had the odd scare before but ultimately always made it to at least the semi-final stage of the World Cup. Photograph: John Sibley/Reuters

Having acquired a reputation as a highly successful problem solver at tournaments these past few years, Joachim Löw must complete the challenge Germany set for themselves with their opening group game defeat here in Russia a week ago.

Notionally, at least, the reigning champions could lose today and still progress but victory by two goals will guarantee it and their manager suggests it is time for the team to become “masters of our own destiny” again.

His opposite number, Shin Tae-yong, puts South Korean chances of securing the win they they need to secure a place in the last 16 at “one per cent,” which should make for one hell of a team talk but Löw declined to get drawn into quantifying the scale of Germany’s discomfort.

After Mexico, he does acknowledge, however, very little can be taken for granted.

The 58-year-old is expected to make three changes for the game in Kazan but two of those are enforced with Sebastian Rudy’s nose so badly shattered against Sweden that even playing in a mask is apparently out of the question and Jérôme Boateng suspended.

In their places, Ilkay Gündogan and Mats Hummels are expected to start while Niklas Süle may well take the other slot in central defence at the expense of Antonio Rüdiger.

It is an area for concern for a team unused to having to fight for its tournament survival quite so early in the proceedings with at least one goal conceded in every match they have played since the scoreless draw with England last November. Letting even one in this time will make will not make that two-goal margin any easier to achieve.

Under Löw, they have had the odd scare before but ultimately always made it to at least the semi-final stage. This time, though, there is an enduring sense that things are not quite right in a few departments and so, while the manager says they have worked hard to address their defensive issues, he also admits that it would be “nice if we (the team as a whole) didn’t give the ball away quite as much in this match”.

A particular problem is the form of Thomas Müller who Löw says he sat down with in the wake of the Mexico defeat in order to find out quite why the 28 -year-old wiho scored five goals for his country in each of the last two World Cups isn’t firing on all cylinders.

“We had a long chat and tried to analyse the way he played with the help of videos,” revealed the coach.

“He is open to appraisal and suggestion and is quite self-critical but with a positive mindset and so he is an important player for us.”

He looked less important last time out than the likes of Toni Kroos and, in particular, Marco Reus, the two goalscorers against Sweden while 22-year-old Bayern Leverkusen winger Julian Brandt has done well enough in his two late appearances from the bench here in Russia to prompt calls for him to be handed a first World Cup start against the Koreans, something that would not be a complete surprise.

Löw, though, may opt to stick with his more tried and generally still trusted players against a side that has narrowly lost both of its initial group games and is now depleted by the absence through injury of both skipper Ki Sung-yueng and veteran defender Park Joo-ho.

Their team retains a mathematical chance of going through and a less remote one of making a mark as they depart by ensuring the Germans go out too. Löw is not taking the threat lightly, he insists, and suggests his midfield will have to be more lively against opponents who work harder in midfield to chase players down in the hope of winning possession than the Swedes did.

Unsurprisingly, the Koreans, for their part, see Mexico as their model but, to emulate what the group leaders achieved in the opening round of games, they will have to work tirelessly in every department, including attack where Hummels found himself without the time and space he usually enjoys to get things rolling forward from the back.

Nothing much the twice Asian champions has done so far suggests they are quite up to something similar but if, as we have already seen, the Germans don’t gel a little more effectively, then anything is possible. After all, as Shin Tae-yong, says pretty often, “the ball is round”.

1 Darragh Ó Sé: Cork and Donegal went out with the wrong attitude
2 Kevin McStay: Maybe a knockout All-Ireland Championship is the long-term solution?
3 Simon Easterby admits Ireland may need to take new line on maul
4 Gerry Thornley: Ireland don’t want to box themselves into a corner
5 The Offload: Ireland are stuck in no man’s land
Real news has value SUBSCRIBE
Crossword Get access to over 6,000 interactive crosswords