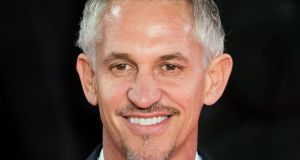 The World Cup draw will take place in the State Kremlin Palace in Moscow on Friday. Gary Lineker will co-host alongside the Russian TV presenter Maria Komandnaya

England fans at the World Cup finals in Russia next summer have been told to restrict their alcohol intake to one pint of beer before or after the game in order to ensure their safety.

A tourism executive said he believed there would be no repeat of the violent clashes that marred Euro 2016, providing England fans do not get too drunk.

A Russian mob marched on England supporters and picked them out in Marseille during Euro 2016, heightening fears that similar orchestrated attacks could occur.

Igor Karzov of Visit Russia said travelling England fans could take certain precautions. “British fans love to drink a lot, we know that and I can’t guarantee safety if fans are really drunk and offensive,” he said. “We can’t guarantee everything’s going to be okay in that case. I would recommend to make sure that you don’t drink a lot when you’re in Russia. It’s okay to have a pint before or after the game.

“The security services will have a high level of control in Russia so they will try to make sure that people are not drunk. They will be watching and set up controls. They will restrict alcohol to avoid any possible conflicts. The police will make sure everything is okay.”

Karzov was speaking at a Russia 2018 roadshow in London, designed to promote tourism in the country around the tournament. “I don’t want to correspond the thing that happened in France to the World Cup because in general people in Russia are very hospitable and for them this is the biggest event in their lifetime,” he said. “Most of them are going to make sure the foreign fans coming to Russia are feeling awesome and also enjoy the cities and the country.”

The draw will take place in the State Kremlin Palace in Moscow on Friday. Gary Lineker will co-host alongside the Russian TV presenter Maria Komandnaya.

Lineker has been a vocal critic of Fifa, claiming the governing body was infected with a “nauseating” level of “corruption”. But Fifa’s general secretary, Fatma Samoura, said the former England striker had been convinced the organisation was committed to reform. “I just met Gary and his spirit is very high,” she said. “He told me he was very delighted to be here.

“Everybody can be critical at a certain stage . . . but then you see that progress is being done on issues that are sensitive. If you accept to come here, it means that he is ready to work with Fifa. To me, this is the most important thing.”

Fifa was forced to deny that there would be any tampering with equipment to ensure the host nation land an advantageous draw. The former Fifa president Sepp Blatter claimed last year that some European football draws had been fixed with the use of hot and cold balls.

“There’s no truth to that,” said Chris Unger, Fifa’s director of competitions. “They’re all the same; they don’t feel any different, they don’t look any different, with the exception of the red balls [used to distinguish a top-seeded team], which are there for a purpose. It’s entirely random and by chance how the groups get formed at the end.”