Fifa again calls for improvement to workers’ conditions in Qatar 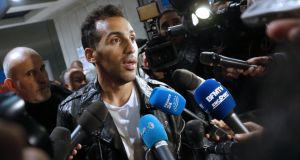 French footballer Zahir Belounis on his return to Paris after being detained in Qatar for more than two years due to exit visa laws. Photograph: Thomas Samson/AFP/Getty Images

Fifa has said it will not revise its decision to grant Qatar the 2022 World Cup but will continue to monitor the country’s treatment of migrant workers.

At a hearing in the European Parliament in Brussels yesterday, senior Fifa official Theo Zwanziger said the conditions faced by workers in Qatar were “unacceptable”.

“The minimum requirement [FOR FIFA]would be that as quickly as possible the conditions are improved for workers, and for players that are active there as workers,” he said. “Fifa will not turn a blind eye.”

Zwanziger, the German member of Fifa’s executive council who has been tasked with dealing with the issue, and Zahir Belounis, a French footballer who was detained in Qatar for more than two years due to exit visa laws, appeared before the European Parliament’s sub-committee on human rights yesterday, as part of the ongoing investigation into the matter. Amnesty International and the International Labour Organisation also addressed MEPs.

Last November, the European Parliament passed an emergency resolution condemning the widespread abuse of migrant workers in Qatar, describing the work practices in the Gulf State as “modern slavery”.

Hundreds of migrants working on construction projects have died in the Gulf state as it prepares to host the World Cup in 2022, with the International Trade Union Confederation (ITUC) estimating that 4,000 more lives could be at risk if conditions do not improve.

Speaking at yesterday’s hearing Zwanziger said that while Fifa’s decision in 2010 to choose Qatar as the host country for the 2022 World Cup meant it held some responsibility for the treatment of workers, other factors were at play.

“We cannot do all of the work by ourselves. Clearly changes to the state system – legislation at a political level – are required. Trade unions should be involved as well. Fifa cannot claim to do everything,” he said.

He said that the decision to grant Qatar the tournament had been both a “risk and opportunity” for Fifa. “By granting the World Cup to this country we can lead to an improvement in people’s working and living conditions.”

Belounis, who was detained in Qatar for two years because of the ‘kafala’ system which binds migrant workers to their employers, told MEPs how his football club ceased paying his wages after four years with the club. When he tried to secure his payment and leave the country, he was prevented from doing so. “All we wanted to do was to go home to France. For months, I was on my own with no response from the club and no way to get out of Qatar,” he said, adding that other people had undergone similar experiences. “I was the unfortunate victim of a feudal system,” added Belounis.

However, Belounis echoed Mr Zwanziger’s view that the decision to grant Qatar the World Cup should not be revised.

Earlier this week Qatar released a report setting out a workers’ right structure for World Cup projects. But Sharan Burrow, general secretary of the ITUC described the charter yesterday as a “sham”.

“Fifa must re-run the vote if they genuinely believe in human rights,” she told the committee.

Amnesty International said that while the new standards could improve the situation for workers working on World Cup projects, they did not apply to other infrastructure projects in the country, and failed to address the fundamental problem of the Kafala sponsorship system.

“To truly prevent abuse and exploitation in the build up to the World Cup, there is no substitute for government- led reform. We are asking the Qatari government to make fundamental changes to the sponsorship and labour laws,” Amnesty International’s James Lynch said.

The chair of the European Parliament’s human rights committee, German MEP Barbara Lochbihler yesterday criticised the decision by the Qatari embassy in Brussels not to attend the hearing. She also welcomed Amnesty’s call for European construction companies who are involved in World Cup construction projects in Qatar to take responsibility for the treatment of their workers.

A delegation from the European Parliament is due to visit Qatar next month.