Roy Keane expected to stick with Ireland for Euro 2020 qualifiers 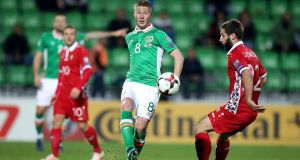 Roy Keane will be staying on as assistant manager for the next European Championship qualifying campaign, according to Martin O’Neill who says the 46-year-old continues to enjoy his role in the international setup.

“We have agreement with John [Delaney],” said O’Neill at Three’s headquarters in Dublin where he named a preliminary squad of 34 players for next month’s World Cup play-off against Denmark.

“Nothing has been signed up but it was the same the last time [pre-Euro finals], and I think Roy would want to stay around. I’m not his keeper but I’m sure he would like to stay around. He enjoys it . . . mostly,” he concluded with a grin.

The pair look set to have James McCarthy back for the trip to Copenhagen and O’Neill says he has not given up on Jon Walters playing some part in at least one of the legs even though he has not actually named him at this stage among such an extended squad.

Paul McShane, Matt Doherty and Alan Browne have made the cut after having missed out last month while Kevin Doyle is gone, for good, having retired from the game due to injury.

McCarthy is the most significant inclusion, however, as the manager weighs up how to replace David Meyler who is suspended for the first leg after having impressed since being given his chance to stake a claim to a regular starting spot in the wake of the draw in Tbilisi.

“Meyler has stepped in and done brilliantly,” said O’Neill, “and I think he’s got to be very pleased with his contribution. Meyler has been great around and about the place even when he hasn’t played. He’s been an excellent influence. And so all that enthusiasm, that bit of energy he brings to us, has been rewarded; he even got the captaincy at the end of it all.

“The way he’s played for us in the recent games, he would be hard to replace, I must admit, but James coming back – if he doesn’t pick up an injury between now and then – is a plus for us.

“I thought he didn’t do too badly in the [League Cup] game (on Tuesday, which O’Neill attended). Chelsea changed a few but Chelsea are Chelsea and anything he did wonderfully well would have been a bonus.

“I was speaking to Steve Walford and I thought that they might take him off at half-time but they gave him 60 minutes and that seemed to be the plan; right on 60 minutes he was off. It was good for him to get that game. It’s really encouraging.

“He’d played an under-23 game beforehand. That’s good, it’s a big improvement for him coming in compared to the last time with no football since July.”

While McCarthy has been missing out through injury, James McClean has been struggling to get starts at West Brom despite being fully fit and there have been signs of late that his frustration might be growing but O’Neill does not believe there is the slightest concern that the issue might affect his form for Ireland.

“I think if someone is not playing regularly . . . I’d be really disappointed if he wasn’t frustrated. But does him not playing games really bother me? Well, he’s the fittest player I’ve seen since, maybe my time . . . maybe Craig Johnston [the former Liverpool player]. I have to mention him as I was speaking to him just recently. “James is very fit, he looks after himself brilliantly so I’ve no bones with that.

“I’m sure he thinks he’s good enough to play in the West Brom team but he knows how important he’s become to us, I think he feels pretty special. And he’s proved it too. He’s been like the Jon Walters of the Euros.”

That “special” status was underlined by his goal against Wales, the decisive event on a night when, it was put to O’Neill, the Irish ultimately broke the spirits of their opponents.

“I don’t disagree with you,” he said. “You have to set out to impose a will for yourself but also on your opposition. I think the longer the game went on, I felt it was coming stronger. Of course we still had to find the net, had to score a goal, we knew that, and McClean came up with a big, big goal.

“I don’t say that the game fell into our hands after that, not at all because anything can slide off somebody and go into the net but you felt that Wales would start putting it into the area; most teams would do, it doesn’t matter how skilful you are.

“But we showed great resilience not to concede at all and so I don’t disagree with you – you have to impose your will on the other team and we have managed to do that. I hate talking about this now because we have the two games, we have to overcome Denmark and it won’t be easy.

“We could get beaten in the two games and get knocked out, but it won’t be through lack of trying.”